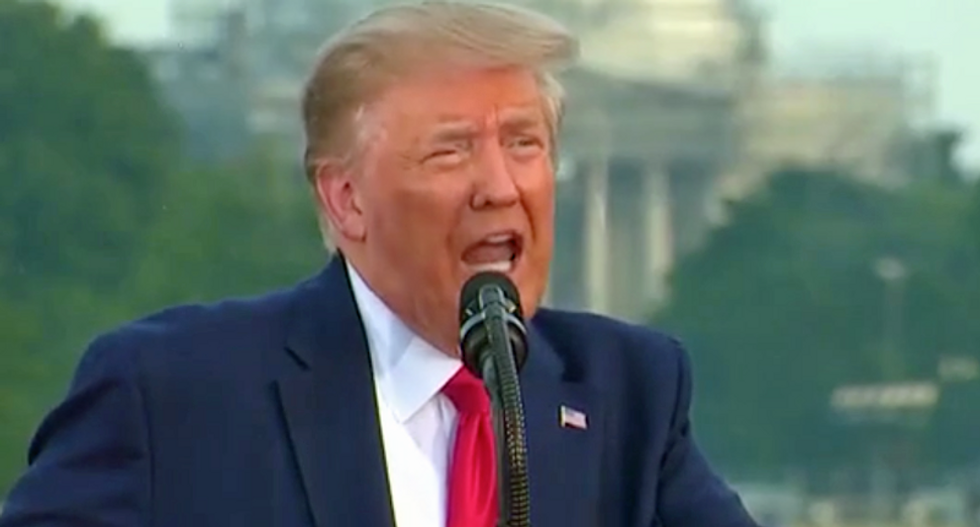 President Donald Trump is gambling his re-election on stoking anger over the removal of statues as Americans reckon with racist history.

However, some of the president's associates aren't sure he should be obsessing over statues of historical figures while tens of thousands are dying from the coronavirus, reported The Daily Beast.

“The question now is: Is the statue sh*t going to work?” said one senior Trump campaign adviser.

The polling on statues is "inconclusive" at best, that adviser said, but on-the-record campaign officials took shots at Joe Biden for not standing up for the statues of historical figures who owned slaves or helped perpetuate racism.

“There is a loud, visible, and sometimes violent faction on the extreme left that seeks to delegitimize America’s very existence,” said Tim Murtaugh, the campaign’s communications director. “President Trump has made clear he will not stand for that. By contrast, the first instinct of Joe Biden and his party is to agree with the agitators that there is something fundamentally wrong with America and that there always has been.”

Outside the campaign, some Trump allies are skeptical that statues will rescue the president's re-election chances in the face of major health and economic crises.

“[He] doesn’t need to say anything [about it]," said lobbyist Barry Bennett, who served as a senior adviser for the 2016 campaign. "Everyone is already talking about it … I would talk about jobs, jobs, and jobs. Five million people went back to work last month. Talk about them … The [statues] issue is playing out without him.”

Trump, on the other hand, keeps insisting that statues will win the race for him, and he plans on sticking with his message of “heritage and our history” that has percolated beneath his presidency since white supremacists marched against the removal of Confederate memorials at Charlottesville.

“One issue is that the president and some of his people see something on Fox News and then take that to mean that that issue will resonate with most voters: Republican, independents, even some Democrats or former Democrats,” said a Republican operative who's close to the White House. “That is what is happening with the hyper-focus on this [statues] issue and it doesn’t always work out. Look at the caravan during the [2018] midterms.”

Trump tried to stoke anti-immigrant fervor in that election to boost Republican candidates, but Democrats took back majority control of the House in a "blue wave" election.

At least three individuals working on the campaign privately expressed doubts that Trump's statues fixation would help win back suburban women voters, but the president's associates insist internal polling shows the public agreed with his stance.

"The issue is so much bigger than just monuments," said former Rep. Jack Kingston, a Trump pollster. "It’s about our history, values, and freedoms. It’s about those that believe America should be the land of the free vs. the land of big government that takes away our freedoms.”