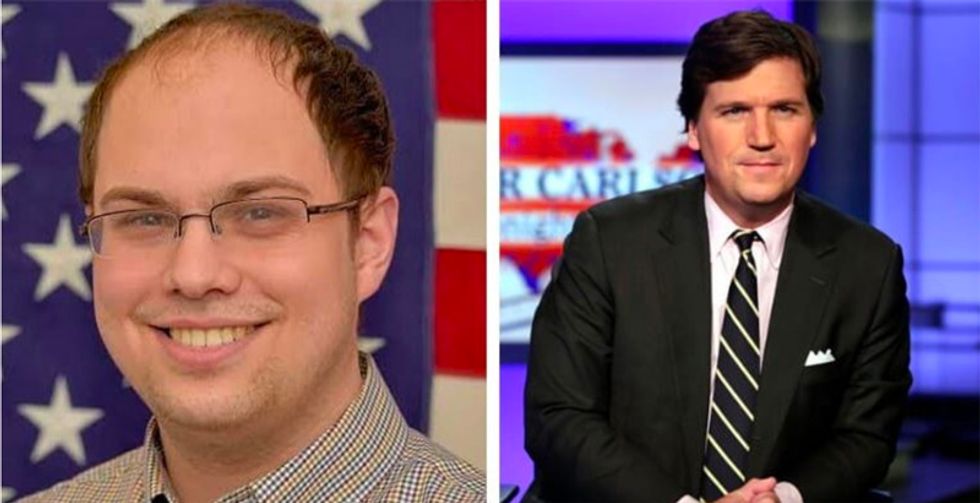 Blake Neff, the lead writer of The Tucker Carlson Show on FOX News, resigned on Friday after CNN uncovered a trove of disgustingly racist, homophobic and misogynist social media posts that Blake published under the handle “CharlesXII” on AutoAdmit (aka. XOXOhth), a largely unmoderated message board used by lawyers and law school students.

Among Neff’s most telling posts are a reference to “foodie faggots,” a comment stating, “Black doods staying inside playing Call of Duty is probably one of the biggest factors keeping crime down,” and another comment stating that Democratic U.S. House Representatives Alexandria Ocasio-Cortez, Ilhan Omar, Ayanna Pressley, and Rashida Tlaib, all women of color, want to “MAKE YOUR COUNTRY A DUMPING GROUND FOR PEOPLE FROM THIRD WORLD SHITHOLES.”

Neff also maintained a 5-year-thread, running from 2015 to last month, where he used degrading and misogynist language while commenting about social media posts made by a random 30-something-year-old woman he described as an “Azn megashrew.” He entitled another comment thread about a woman who sought to freeze her eggs during the pandemic “Disaster: WuFlu outbreak endangers aging shrew’s quest to freeze eggs.”

“On June 26, Neff wrote that the only people who care about changing the name of the NFL’s Washington Redskins are ‘white libs and their university-‘educated’ pets,'” CNN reports.

This is all especially disturbing as The Tucker Carlson Show has the highest-rated show in the history of cable news and regularly influences President Donald Trump and other extremists with its racist and inflammatory comments.

“His show has long appealed to extremists who agree with his hardline views on immigration, his emphasis on the preservation of Western culture, and his commentary on topics of race,” CNN writes. On his show, Carlson has called white supremacy a “hoax” and claimed that Black Lives Matters protestors will come after the show’s conservative, and presumably white, viewers.

Carlson has called Neff a “wonderful writer.” In his 2018 book, Ship of Fools, Carlson said Neff and others “work on and greatly improve our nightly show on Fox.” Neff also wrote for The Daily Caller, the right-wing site co-founded by Carlson. Neff deleted his Twitter and LinkedIn accounts shortly after CNN exposed his past posts.

Is Carlson going to pretend to have been unaware of his close associate's posts? Is he going to defend his associat… https://t.co/E3OfK2u4A4
— Bill Kristol (@Bill Kristol) 1594423599.0

The writer, Blake Neff, previously was a reporter at The Daily Caller, which Carlson founded and has featured a han… https://t.co/t3BReD5aVF
— Jason Leopold (@Jason Leopold) 1594422503.0