WATCH: Fauci laughs as Republican Jim Jordan attempts to get him to call for banning protests 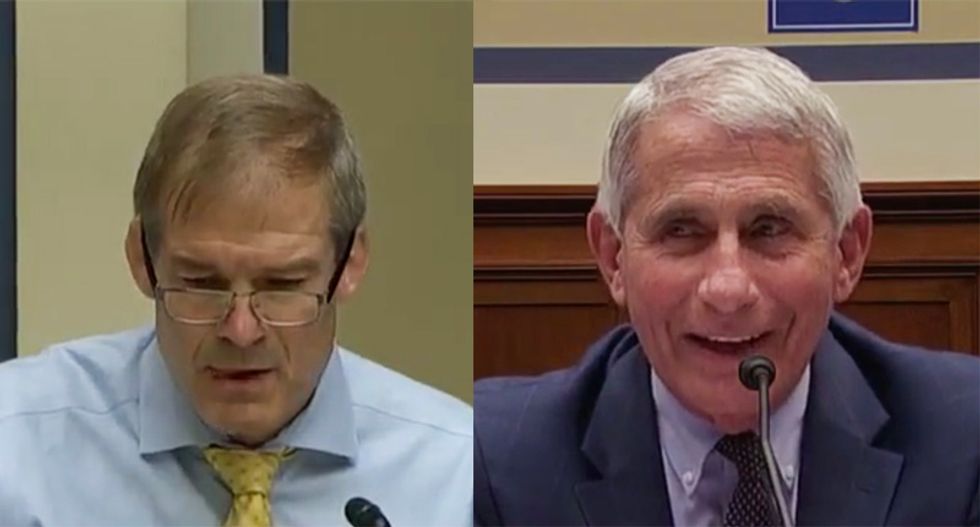 Rep. Jim Jordan clashed with Dr. Anthony Fauci on Friday during a House hearing about the current status of White House efforts to stem the coronavirus pandemic. The confrontation resulted in the director of the National Institute of Allergy and Infectious Diseases smiling and laughing at the Ohio Republican as he tried to drag the doctor into a political debate about Black Lives Matter protesters.

Jordan came right out of chute ranting about protests and trying to get the doctor to call for the halting of public protests -- something Fauci said was not his call.

"Crowding together particularly when you're not wearing a mask contributes to the spread of the virus," the doctor carefully replied.

"Should we limit the protesting?" Jordan persisted.

"I'm not sure what you mean should -- how do we say limit the protesting? I don't think that's relevant," the doctor replied.

"Well, you just said if it increases the spread of the virus, I'm asking should we limit it?" the Republican asked.

"Well, I'm not in a position what a government can do in a forceful way," Fauci advised,

That was when Jordan went off on a rant, loudly asserting, "You make all kind of recommendations. You made comments on dating and baseball and everything you can imagine. You just said protests increase the spread -- should we try to limit the protest?"

"No, I think I would leave that to people who are more in a position to do that," Fauci replied while beginning to smile and look from side to side as Jordan went off on a rant about churches being forced to close, finally answering the congressman and telling him, "I'm not favoring of anybody over anybody. I'm just making a statement that's a broad statement that avoid crowds of any type no matter where you are because that leads to the acquisition and transmission, and I don't judge one crowd versus another crowd. when you're in a crowd, particularly if you're not wearing a mask."