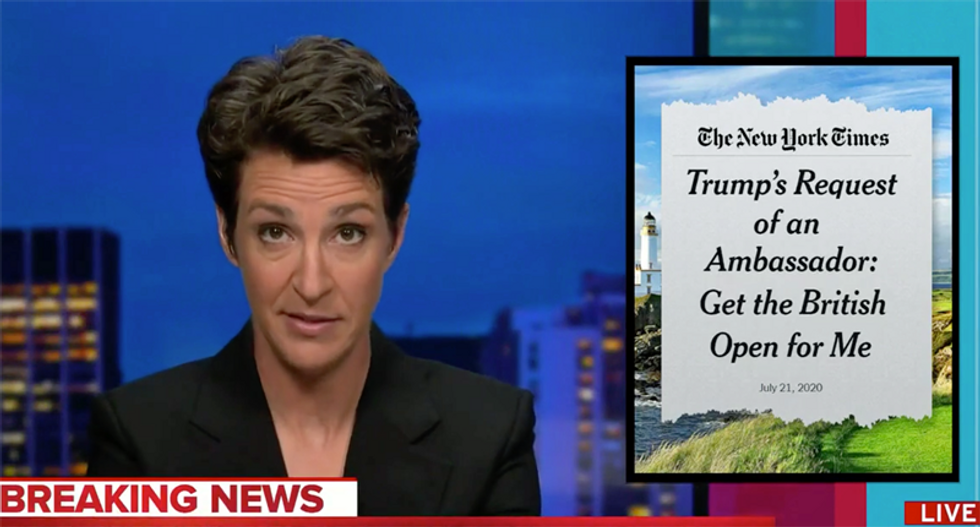 The host of "The Rachel Maddow Show" on MSNBC blasted President Donald Trump on Tuesday after a bombshell new report that Trump pressured Ambassador Woody Johnson in an attempt to personally enrich himself by having the British Open golf tournament played at his private resort in Scotland.

"The American ambassador to Britain, Robert Wood Johnson IV, told multiple colleagues in February 2018 that President Trump had asked him to see if the British government could help steer the world-famous and lucrative British Open golf tournament to the Trump Turnberry resort in Scotland, according to three people with knowledge of the episode," The New York Times reported Tuesday. "The ambassador’s deputy, Lewis A. Lukens, advised him not to do it, warning that it would be an unethical use of the presidency for private gain, these people said. But Mr. Johnson apparently felt pressured to try. A few weeks later, he raised the idea of Turnberry playing host to the Open with the secretary of state for Scotland, David Mundell."

"Mr. Lukens, who served as the acting ambassador before Mr. Johnson arrived in November 2017, emailed officials at the State Department to tell them what had happened, colleagues said. A few months later, Mr. Johnson forced out Mr. Lukens, a career diplomat who had earlier served as ambassador to Senegal, shortly before his term was to end," the newspaper noted.

The host explained the latest scandal as part of a pattern.

"And I know what you're thinking, right? President Trump using his power as president, using the U.S. government to pressure a foreign government to do him a favor using the office of the presidency to benefit himself. Career civil servants forced from their posts after raising alarming alarms about what was happening. We have seen this version of the movie before, right? We have, the last time it ended with him being impeached," Maddow noted.

"The new report in The New York Times does differ from the Ukraine debacle in one key way: when President Trump was pressuring the Ukrainian government, using the powers of the U.S. government to pressure the Ukrainian government to give him dirt on Joe Biden that he could use in the election, he was pushing that foreign government for a political favor. What he appears to have been trying to get from the British government here was money, was a business favor for his business, was a basically a personal financial favor that would put money in his own pocket," Maddow explained.