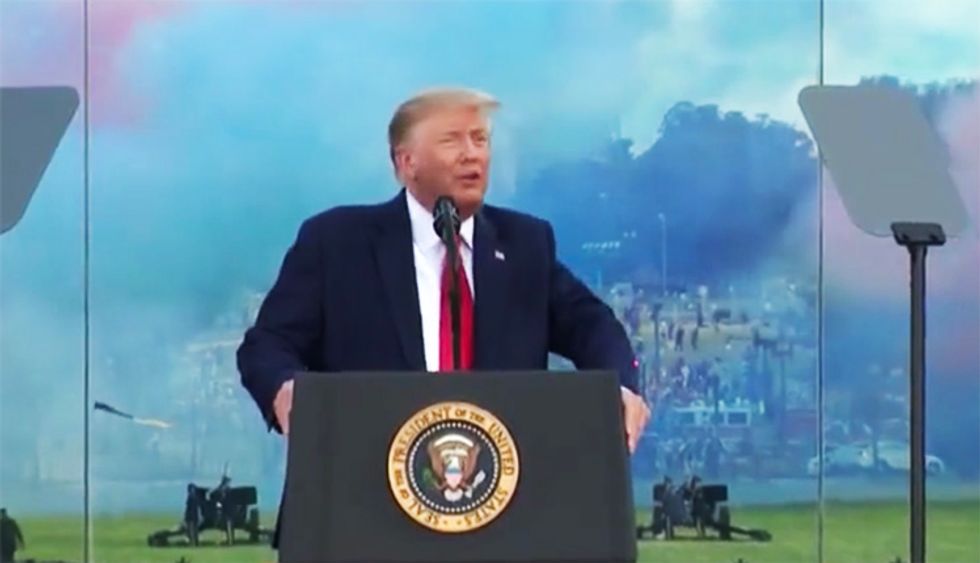 Appearing early Sunday morning on CNN, "Reliable Sources" host Brian Stelter called out the divisive nature of Donald Trump's July 4th speech on Saturday, saying the president did the "Trump two-step' where he made boilerplate comments about the promise of America while at the same time throwing out highly-charged accusations.

"Basically no mention of the pandemic in the president's 4th of July remarks," the CNN host began, "But lots of talk about the culture war issues that are dividing the country and being stoked by right-wing media. There was a great headline in the Washington Post saying in Trump's new version of American carnage, the threat is not immigrants or foreign nations, it is other Americans."

'The president is leaning into this message about far-left radicals, claiming essentially that protesters are extremists out to tear down the country," he added. "That does not relate in any way to the pictures we see on television, the protests that we see that are largely about peaceful marches down streets across this country -- but also it speaks to how hollow the rhetoric is."

"I think he does the Trump two-step," Stelter elaborated. "Rhetorically, this is impressive; he says we're all united and all Americans. He talks the same way every other president has and says we're all in this together. but then he attacks people that he calls anarchists and agitators. He says enough in these speeches that sounds uniting and sounds about the best of America and those are the quotes that the Fox News world will promote and highlight, then he also talks in divisive ways about fellow Americans, so he can do both in the same speech and create different kinds of conversations around his speeches as a result."