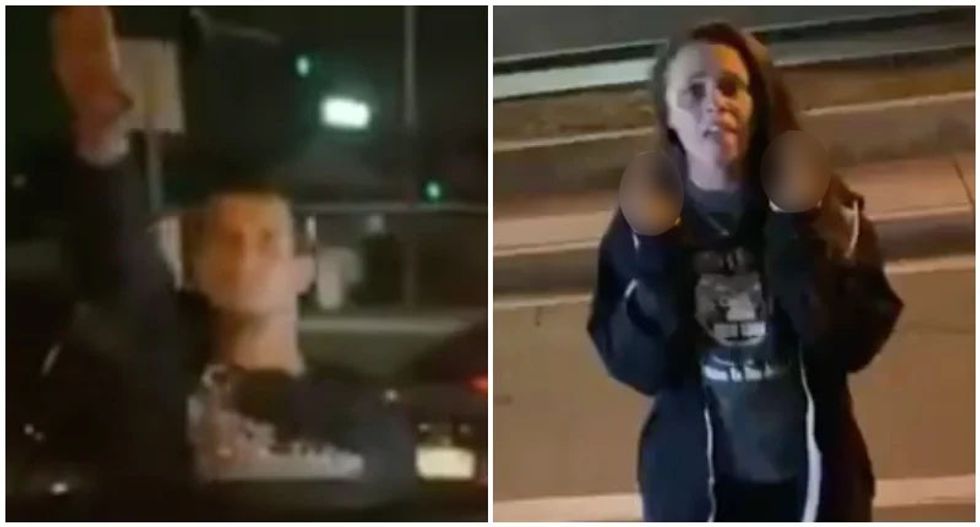 A white couple stalked and racially harassed a biracial couple in southern California.

Itzel Lopez and her boyfriend were returning from her birthday dinner about 10:30 p.m. Wednesday when she noticed two people following them in a pickup, and she said they pulled in front of them at a red light, reported KTLA-TV.

“I don’t know why they followed us for miles until we came to a complete stop because they cut us in front,” Lopez said.

A man and woman got out of the pickup, and Lopez started recording as the other woman stood in front of their car and would not let them pass.

"White lives matter, b*tch!" the woman says in the video.

The man performs a Nazi salute in front of Lopez's boyfriend, who is Black, and they laugh in astonishment.

"White power," the boyfriend says sardonically. "They're not even the Hell's Angels."

The video then shows the other man grab an item from the truck and approach the driver's side of the car, which he strikes a couple of times before the boyfriend drives away.

“We were just in shock," Lopez told the TV station. "We didn’t know what was going. Why were they doing it? They don’t know us. They were being really mean and racist.”

Lopez and her boyfriend managed to record the truck's license plate and report it to police, who identified the white couple through tips from social media.

Torrance police are investigating the encounter as a hate crime, but no arrests have been made yet.