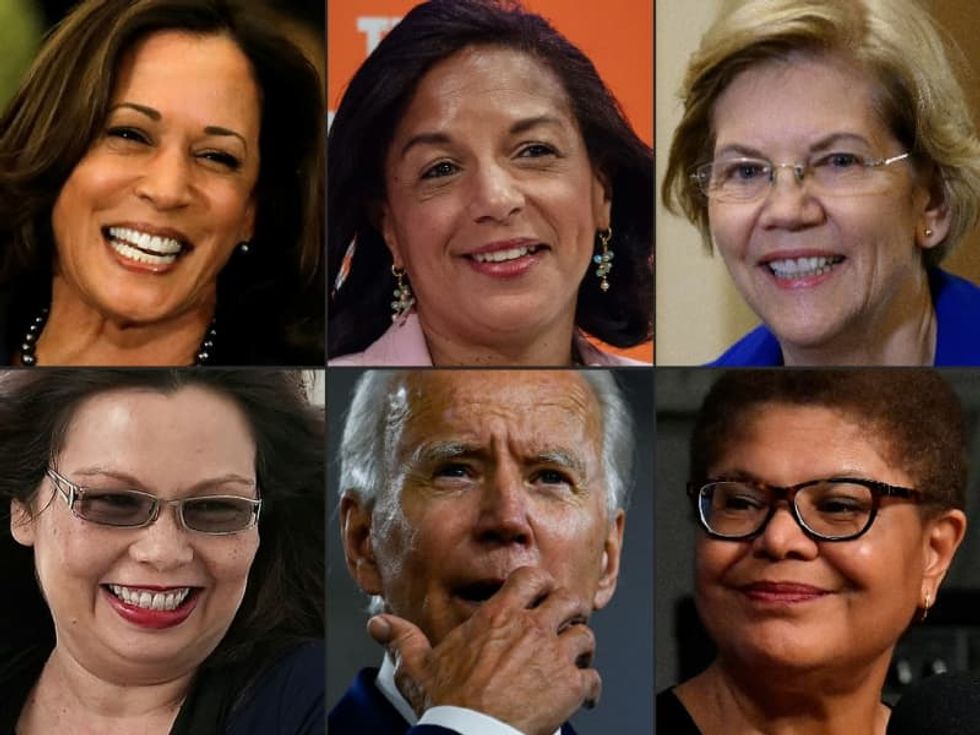 As the rumors and leaks fly, analysts are working overtime to predict who Joe Biden will pick as his running mate for the November 3 elections -- a choice that could produce the first female vice president in American history.

While history suggests that the Democrat's pick will probably have a minimal impact on voters' intentions, some analysts say it could make a crucial difference in helping mobilize black voters or those in Midwestern states who tipped the 2016 election to Trump.

Biden, who leads President Donald Trump in most polls, committed himself earlier to choosing a female running mate and is expected to announce his pick soon.

Now, in the wake of the historic wave of black anger against police violence and systemic racism unleashed by the death of George Floyd, pressure has grown on the 77-year-old Democrat to choose an African American as his Number Two.

"My mother would often tell me that if you're the first to do something, make sure you're not the last," Kamala Harris liked to say during her unsuccessful run for the Democratic nomination.

Throughout her career, this daughter of Jamaican and Indian immigrants has compiled a long list of firsts. She now hopes to add the distinction of being the first black running mate in a major party and, possibly, the first female vice president of the United States.

Following two terms from 2004-2011 as district attorney for San Francisco, she was twice elected as California attorney general, making her both the first woman and the first African American to serve as the top law enforcement official of the most populous US state.

Then in January 2017, she was sworn in as a US senator for California, becoming both the first woman of South Asian descent and the second black female senator in US history after Carol Moseley Braun.

Harris grew up in Oakland, in the progressive California of the 1960s, proud of her parents' struggle for civil rights.

She knows Biden well and was close to his son Beau, who died of brain cancer in 2015, aged 46.

But she surprised viewers -- and Biden himself -- by attacking him during a Democratic primary debate in 2019 over his racial policies in the 1970s, including his opposition to mandatory school busing to achieve racial desegregation.

She recalled with some emotion how she, as a young girl, was one of the black students bused to schools in white neighborhoods in a program intended to give them greater opportunity.

That gave her a brief boost in the polls, but as she struggled to clearly define her candidacy, the early gains faded.

After dropping out of the race in December, she threw her support to Biden in March.

But some Biden allies have not forgiven the senator for her early attack and have warned that she might be too "ambitious" as a vice president -- promoting her own future rather than faithfully assisting the president.

That charge, in turn, has infuriated Harris's supporters, who say she is being judged by a sexist double standard.

A tough, wonkish diplomat, Susan Rice would offer Biden a trusted hand at foreign policy but has never been tested as a politician herself.

The African-American daughter of two prominent public servants, 55-year-old Rice, grew up in Washington and returned after studies that included a prestigious Rhodes scholarship at Oxford.

She is known for her mastery of policy detail and her warm working relationships with both Biden and former president Barack Obama. She served Obama as national security advisor and ambassador to the United Nations, where she had spirited clashes with the Russian and Chinese ambassadors.

In a 2009 interview with National Public Radio, she drew a parallel to how she played basketball at a height of five-foot-three (1.6 meters).

"I don't throw elbows for the sake of throwing elbows, but if somebody throws one at me and it's necessary to respond in kind, I suppose I can," she said.

If Biden picked her, Republicans would be sure to revive the deadly 2012 attack on the US consulate in Benghazi, Libya, for which Rice became the reluctant public face, ultimately ending her hopes of succeeding Hillary Clinton as secretary of state.

In 1994, Rice was also part of a US policy of inaction during the genocide in Rwanda -- a decision that would haunt her and contribute to her advocacy for a forceful intervention in 2011 in Libya, which remains in chaos.

Rice would be an unusual pick, given her lack of background in domestic affairs.

However, she has campaigned for several Democratic candidates and has pointedly criticized Trump over his handling of the coronavirus pandemic and protests for racial equality.

There would be some irony if she were to be picked and become the highest-ranking woman ever in US government -- she would outpace Hillary Clinton, accused by Rice loyalists of letting her take the fall over Benghazi.

Relatively unknown to the general public despite a long career in the California State Assembly and the US Congress, Karen Bass has emerged in recent days as a surprising member of Biden's short list for running mate.

Indeed, her reputation as a competent, hard-working but understated member of the House of Representatives could hold special appeal for Biden.

She has said she would not be interested in a 2024 presidential run if Biden is elected and decides to serve a single term, which could position her as the same sort of faithful right-hand helper that he himself was to Obama.

At 66, Bass heads the Congressional Black Caucus and has proposed police reform legislation bearing the name of George Floyd, the African American who died under the knee of a Minneapolis policeman.

Serving in the House since 2011, Bass, a onetime physician's assistant, was elected to the California assembly in 2004 and became its first African American speaker in 2008.

But her strongly left-leaning positions could make her a choice target for Republicans.

A 2016 statement she issued on the death of Fidel Castro could come back to haunt her among Florida's strongly anti-Castro Cuban emigre community: "The passing of the Comandante en Jefe is a great loss to the people of Cuba," she wrote, in a statement still posted on her congressional website.

Asked about that recently on MSNBC, Bass walked the statement back, saying, "It's certainly something that I would not say again," while adding that she strongly supports the Cuban people.

Bass shares a sense of deep personal tragedy with Biden. The former vice president often recounts the pain of having lost a daughter and his first wife in a 1972 traffic accident, and then his son Beau to cancer, leaving a "black hole" in his heart. Bass lost a daughter and son-in-law in a 2006 car crash.

"You know what? I'm ready for anything and everything," she told The Atlantic magazine in an interview last month. "After having lost my kids, I can do anything."

Backed by enthusiastic supporters, the progressive senator from Massachusetts was for a time seen as a favorite in the Democratic primaries, but after several disappointing showings Elizabeth Warren threw in the sponge in early March.

Rather than throw her support to like-minded progressive Bernie Sanders, she allowed the suspense to build before finally declaring her support for Biden in April.

Despite some sharp exchanges during the primary season, Warren has since campaigned actively for her former centrist rival, and joined him Friday evening in an online fundraising event.

With this outspoken critic of Wall Street at his side, Biden could attract more left-leaning voters but also African Americans, who in surveys rate her higher than they do Kamala Harris.

But at 71, she might be ill-placed to serve as a successor. And her resolutely leftist policies could scare off moderates and feed into arguments from the Trump campaign that Biden is the "puppet" of a "radical left."

Naming her as his running mate could also hand Republicans a precious seat in the Senate because in the event of a Biden-Warren win the Republican governor of Massachusetts would decide who fills her seat.

The senator from Illinois would be a groundbreaking pick on several fronts -- a double amputee, a new mother and the first Asian-American on the presidential ticket of one of the two major parties.

In a gripping personal story with some parallels to Obama's life, Duckworth, 52, grew up across Southeast Asia, the daughter of a US soldier and a Thai mother.

She moved to Hawaii as a teenager but her father became unemployed and the family nearly went homeless, surviving through food stamps.

She joined the military and in 2004 was almost killed in Iraq when her helicopter was hit by a rocket-propelled grenade. She lost both legs and some use of her right arm.

But Duckworth went on to leadership roles in veterans affairs and was elected to the House of Representatives in 2012, four years later winning the Senate seat once held by Obama.

In 2018, she gave birth to her second child and became the first senator to bring a baby to the Senate floor.

While she has less of a national profile than some other contenders, advocates say she has shown effectiveness as a lawmaker, succeeding in pushing through legislation that includes a program to support military veterans who own businesses.

She has also shown she can flex political muscle, in June holding up all military promotions to press the Pentagon not to pass over Alexander Vindman, who was fired from his White House job after voicing concern over President Trump's pressure on Ukraine.

American University professor David Barker said that Duckworth would bring advantages to Biden as a "war hero" who is "maybe a little bit more sympathetic and relatable to a broader swath of the electorate."

Other names have been circulating for months, though they appear to be fading in the vice presidential race: They include governors Gretchen Whitmer of Michigan and Michelle Lujan Grisham of New Mexico -- who as a Latina represents a key demographic for Democrats -- as well as Val Demings, a member of the US House of Representatives from Florida.

But Biden's campaign team might also decide, as some others have done, to announce an unexpected pick, guaranteeing a flurry of intense attention.