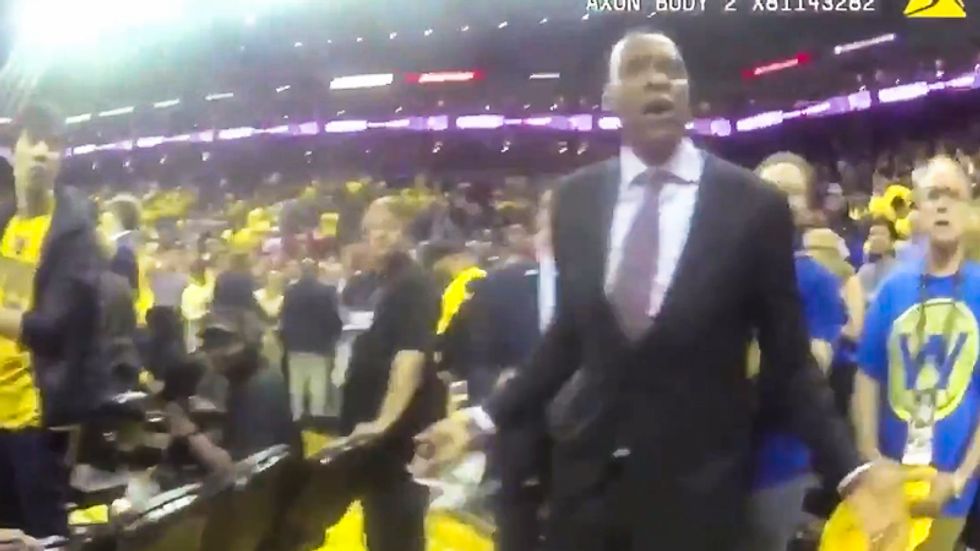 Masai Ujiri, team president for the Toronto Raptors, is counter suing a California deputy who was seen on video shoving him.

The deputy asserted that he suffered injuries to his "body, health, strength, activity and person, all of which have caused and continue to cause Plaintiff great mental, emotional, psychological, physical, and nervous pain and suffering."

The Alameda District Attorney district attorney reportedly investigated the case and declined to press charges against the team president.

On Tuesday, attorneys for Ujiri filed a counter suit after body camera footage showed that the deputy shoved Ujiri twice at the beginning of the 11-second confrontation.

"Only after being unjustifiably told to 'back the f--- up' and shoved twice did Mr. Ujiri show any response and return a shove to Mr. Strickland's chest," the lawsuit says. "Mr. Ujiri's defensive response was a reasonable and justified reaction to Mr. Strickland's use of unnecessary and excessive force."

Read the counter suit and watch the video below.

Masai Ujiri has now filed a motion in federal court to countersue the sheriff's deputy who "perpetrated a fraud" by… https://t.co/YkRC702bJb
— Darren Heitner (@Darren Heitner)1597834581.0