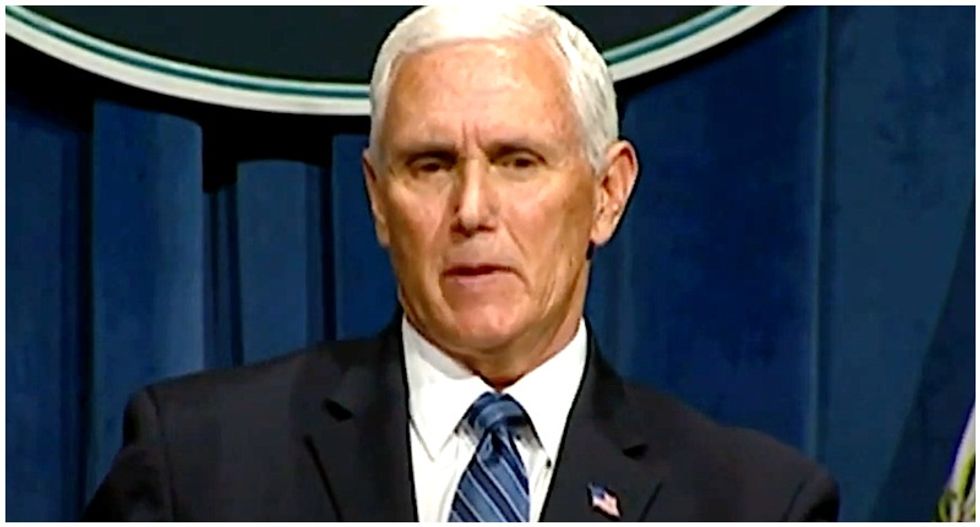 Vice President Mike Pence deserves much of the blame for the Trump administration's response to the coronavirus pandemic -- which has now claimed nearly 180,000 lives in the United States.

The vice president was placed in charge of the pandemic response in late February, when the U.S. still had zero deaths but scores of Americans needed to be evacuated from infected cruise ship, but Pence hesitated to act decisively, reported Politico.

“We definitely lost time,” said one health official familiar with the task force Pence was tasked with overseeing. “How much, I can’t say … but it was disruptive to slam the brakes when we should’ve been going full speed ahead.”

The White House economic team feared upsetting the cruise industry by keeping ships in port, and the task force's plans were put on hold after President Donald Trump tapped Pence to take over for Health and Human Services secretary Alex Azar.

“By the time we locked down the cruise ships, it was too late,” said one former official involved in task force meetings. “The entire country was seeded with virus.”

Azar had alienated nearly everyone who worked with him on the pandemic during his 29 days as head of the task force, and the team lost valuable time as he and Pence struggled for control of the response in the days after Trump relieved the HHS secretary of his coronavirus duties.

“It was this week of ‘who’s on first, who’s in charge,’” said one former official who joined task force meeting calls. “That filtered down and had us spinning our wheels.”

Pence and his team also had to be brought up to speed on the deadly virus and efforts already underway to fight the pandemic, and four sources told Politico their work essentially stopped for several days during that leadership transition -- as the virus continued its spread.

“We spun our wheels at a time when we should’ve been going full speed ahead,” said one official who attended task force meetings.

Pence's office also temporarily sidelined public health experts such as Dr. Anthony Fauci during this period, and officials acknowledge this probably hurt efforts to inform the public about the virus at a crucial point.

“I think the ‘messaging’ pause was really a ‘lack of preparedness’ realization,” one former official said.

Participants credit Pence with bringing order to the task force meetings and the daily coronavirus briefings in early spring, and Trump agreed to effectively shut the nation down March 16 by announcing social distancing measures recommended by the vice president and his team.

But they said Pence's consensus-building leadership style often slowed down a decision-making process that should have been much more swift.

“Everything had to go through the task force so people who should not have had a voice at the table — Homeland Security, [Customs and Border Protection], Education, Commerce, all these other people who don’t have a reason — are suddenly killing ideas from health experts during a pandemic,” said one former official who attended the meeting. “Everyone had an equal say when they shouldn’t have. And it slowed the process.”

One senior administration official said Pence had done a good job, despite being slow to recommend masks and declaring June 16 in a Wall Street Journal op-ed there would be no coronavirus second wave, but that official agreed the vice president should have streamlined the decision-making process.

“My suggestion is don’t have 500 f*cking people at the task force meetings," that official said. "That would challenge anyone, and the VP’s a quite effective leader. If I went back in time, I wouldn’t have that meeting, or maybe I’d coordinate a separate smaller meeting — and give Mike a very good COO.”

Another former official said Pence was too afraid of ruffling feathers.

“Next time, don’t worry about playing so nice during a pandemic,” that former official said. “History won’t care who got overruled during a meeting.”