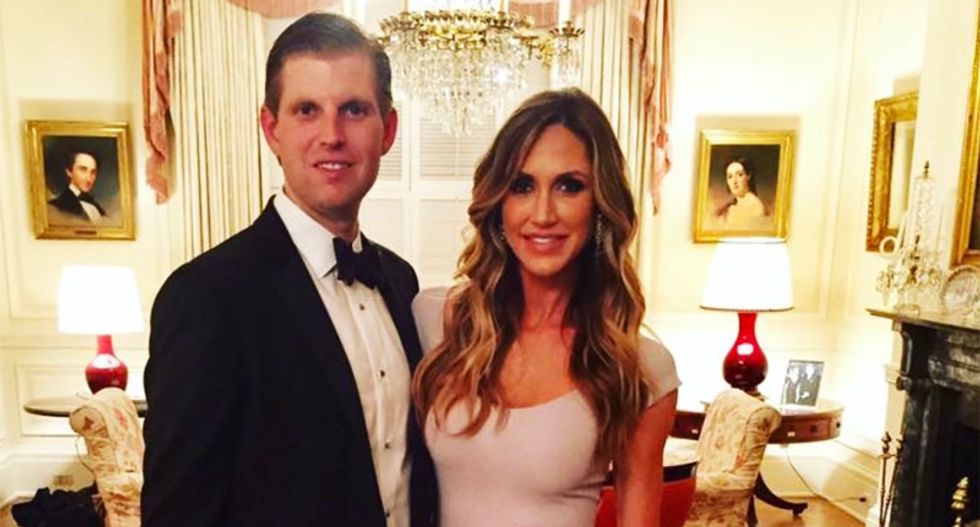 As part of the investigation, James will look into lies put on financial documents embellishing the size and worth of Trump's properties. James specifically asked the judge assigned to the case to demand Eric Trump comply with subpoenas for the company.

“Nothing will stop us from following the facts and the law, wherever they may lead. For months, the Trump organization has made baseless claims in an effort to shield evidence from a lawful investigation into its financial dealings,” James said.

Eric Trump tweeted Monday afternoon that he's under siege by liberals and alleged prosecutorial misconduct was behind the lawsuit about the properties.

"Without any basis, the NYAG has pledged to take my father down from the moment she ran for office," tweeted Eric Trump. "This is the highest level of prosecutorial misconduct - purposely dropped on the eve of the Republican Convention for political points. Sad that this is her focus as New York burns."

Without any basis, the NYAG has pledged to take my father down from the moment she ran for office. This is the high… https://t.co/ocPPdenEZS
— Eric Trump (@Eric Trump)1598297806.0

It's unclear what Trump means about New York burning, as there are no fires in the state. California wildfires have burned nearly 1 million acres, however.

Rep. Adam Kinzinger (R-Ill.) on Friday voiced his concerns about the Republican Party's ousting of Rep. Liz Cheney (R-Wyo.) as he suggested that the decision may ultimately backfire on his party.

On Friday, May 15, Kinzinger appeared on "The View" where he shared his grievances about House Republicans' vote to oust Cheney. The vote was cast on Wednesday, May 12 after Cheney repeatedly pushed back against former President Donald Trump's baseless claims about the presidential election being stolen and his rhetoric that she believes influenced the insurrection on the U.S. Capitol.

During the 1980s, the late Sen. Barry Goldwater of Arizona — arch-conservative Republican, 1964 GOP presidential nominee, and a political role model for future Arizona Sen. John McCain — famously railed against the Christian Right and its growing influence in his party. Goldwater, a blistering critic of the Rev. Jerry Falwell, Sr. and his Moral Majority, believed that far-right White fundamentalist evangelicals were terrible for the GOP and terrible for the conservative movement. But fellow Republicans ignored Goldwater, and the Christian right became the GOP's most powerful voting bloc. One social conservative who did a lot to bring that about was Republican activist Ralph Reed, whose tireless support of the Christian Right is the focus of a new episode of The Atlantic's podcast "The Experiment."

Reed was Goldwater's worst nightmare. While Goldwater and like-minded conservatives and libertarians wanted the Christian right to have less influence in the GOP, Reed has spent decades giving it more influence. And 18 years after Goldwater's 1998 death, Reed aggressively supported Republican Donald Trump in the 2016 presidential election and did a lot to rally White evangelicals around that year's Republican nominee.