‘Everybody is scared’: GOP insiders fear QAnon’s growing influence will have a ‘devastating impact’ on the entire party 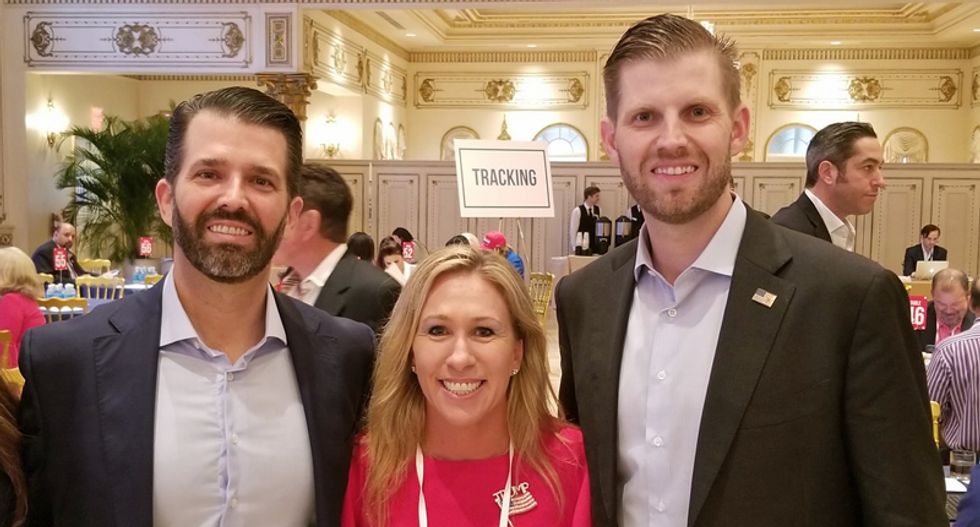 Marjorie Taylor Greene will soon be one of the GOP's newest members of Congress after her recent win of the primary runoff for Georgia’s 14th Congressional District. But Greene's rise has created a problem for Republicans, thanks to her adherence to the QAnon conspiracy cult. She also dabbles in other conspiracy theories related to 9/11 and the death of Democratic National Committee staffer Seth Rich, as well Islamophobia and racism.

Writing for The Dispatch, Declan Garvey says although numerous Republicans, such has Tim Emmer and Liz Cheney condemned Greene's past comments, but did little to stop her. One Republican, Steve Scalise took steps to support Greene's opponent in the primary, as did Georgia GOP Rep. Buddy Carter.

“There’s still a section of this party that demands that candidates go a step further. That you not only be pro Trump, but you have to be pro ... frankly, just conspiracy theories,” the source close to Cowan’s campaign told Garvey. “The most consistent thing we heard [about why voters were supporting Greene over Cowan] was that, ‘Well, she’s gonna go and she’s gonna fight, she’s gonna fight, she’s gonna fight.’ When you prodded a little bit deeper and asked, ‘Well what does that fight look like?’ They couldn’t tell you, but they just know she’s going to fight.”

“I think it should worry all of us,” the source added. “The fact that [Greene] is about to end up in Congress should hopefully be a wake up call for everybody, because she’s no better than Steve King. And you know how long it took to get him out of Congress.”

Speaking out against QAnon can come with consequences, as Rep. Adam Kinzinger of Illinois recently found out. "Trump campaign aide Matt Wolking seemingly interpreted Kinzinger's words as an attack on Trump, "perhaps because Trump himself applauded Greene as a 'future Republican Star' and 'real WINNER' earlier that morning. So Wolking criticized Kinzinger for not condemning 'conspiracy theories pushed by Democrats,'" Garvey writes.

But as Garvey points out, privately, Republicans are worried about Greene's impact on the party.

“Greene could have a devastating impact on the Republican party at-large,” a top House GOP aide told Garvey. “It’s one thing to have fringe members who represent very ideological districts. It’s quite another to have a member who is an avowed conspiracy theorist and traffics in hateful rhetoric that offends the vast majority of Americans. Embracing someone like that will unquestionably turn off the voters who determine congressional majorities.”

Read the the report over at The Dispatch.