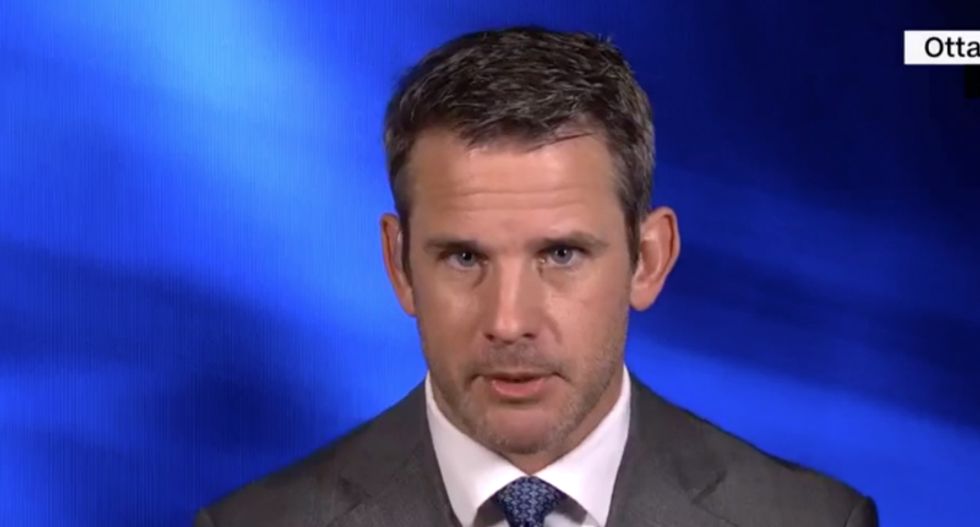 Appearing on CNN's "Reliable Sources" with host Brian Stelter, Rep. Adam Kinzinger (R-IL) expressed disgust with QAnon conspiracy "basement-dwellers" who have made inroads into the Republican Party, saying some of his GOP colleagues need to step up and drive them away.

In an interview that will likely enrage the conspiracy-minded QAnon believers, the GOP lawmaker was unsparing in his criticism of their preposterous theories that he said have poisoned the political atmosphere in the U.S.

Asked by the CNN host to explain the growth of the loosely-organized far-right extremist group, Kinzinger explained, "So, you know, we don't necessarily know where it comes from, if it's one person, if it's a basement-dweller where this started as a joke, if it's multiple people now, if it's Russian intelligence even -- we don't necessarily know. But it started with in October of 2017, what they're calling 'Q drops,' very vague conspiracy theories about this satanic network in the government that Trump was sent to basically tear out."

"They've had predictions about this thing called 'the storm,' a mass round-up and arrest of everybody and of executions of thousands of people and people adhere to this," he continued. "What happens, it kind of confirms what you already believe and it's dark and it's really attractive in some cases. I haven't addressed it for a while but it's made its way to the mainstream and now it's important for leaders to push back."

With host Stelter saying the conspiracy theories are being shared widely and tearing families apart, the GOP lawmaker replied, "I think that's the key."

"If anybody buys into a conspiracy theory, whether on the far left, far right, we never landed on the moon, whatever it is, it's out of an interest of 'if only the truth is known, life would be better for me and other people,'" he suggested. "So, everybody thinks they're the good guy, everybody wants to do right. And I think understanding humanity from that perspective and then engaging them in that perspective through love and understanding is far different. You're never going to offend somebody onto your side."

"If you believe in this conspiracy theory stuff, especially QAnon, do some independent research, there's a lot of stuff debunking it, including all the predictions that didn't come true and now the new Q stuff reads like basically a tarot card reader that gives you something so vague that will fit into something that will happen in the next months," he added.