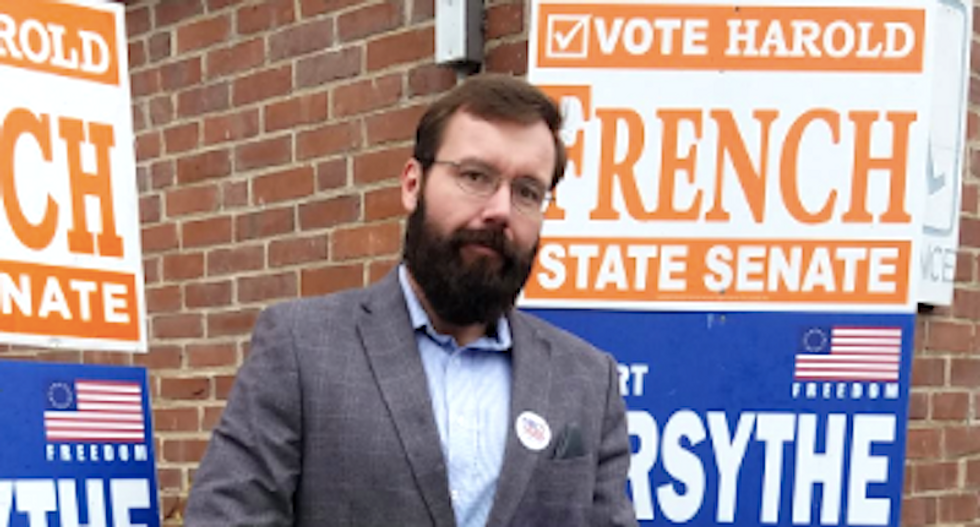 A New Hampshire state representative was accused of brutally attacking his pregnant girlfriend during a domestic assault.

Republican Rep. Robert Forsythe, who's facing re-election in November and has focused almost entirely on gun rights in previous campaigns, was charged with one felony count of second-degree assault and two misdemeanor counts of domestic violence in the June 28 attack in Boscawen, reported the Concord Monitor.

Police found the 38-year-old Forsythe "very intoxicated" outside a home about 1:20 a.m. while responding to a domestic violence report, and the officer recognized the GOP lawmaker from previous encounters.

Forsythe told the officer he had been raped, and police spoke with a woman inside the home who said she had invited him over to sober up.

The woman noticed a knife in Forsythe's waistband, and she claims he told her he was carrying the weapon "because it made her scared."

She discussed her pregnancy with Forsythe and told him the baby could be his, the woman told police, and she said they then began to "fool around" until he "freaked out" and attacked her.

The woman told police Forsythe kneed her in the back, grabbed her by the arms and then choked her, but she managed to grab the knife and escape.

She called 911 from outside as Forsythe raged inside her home, but she ran back into the house after he came outside to confront her, police said.

The woman locked the door behind him, but she said he kicked his way back inside before police arrived.

Officers said Forsythe resisted arrest and tried to flee, but police placed him in handcuffs and got him into a cruiser, where he continued kicking.

Republican Gov. Chris Sununu called on Forsythe to resign after the incident was reported, while House Republican Leader Dick Hinch denounced the attack but stopped short of calling on the lawmaker to resign.

“Rep. Forsythe is the only person who can put pen to paper, and sign a resignation letter,” Hinch said. “The people of Boscawen have the right to ask him to resign if they believe he can no longer represent them. They also have the ability to vote for alternative candidates, including write-ins, if they believe they no longer want Rep. Forsythe to represent them in Concord.”