'His politics are appalling': Mnuchin family disgusted by Steve's fealty to Trump 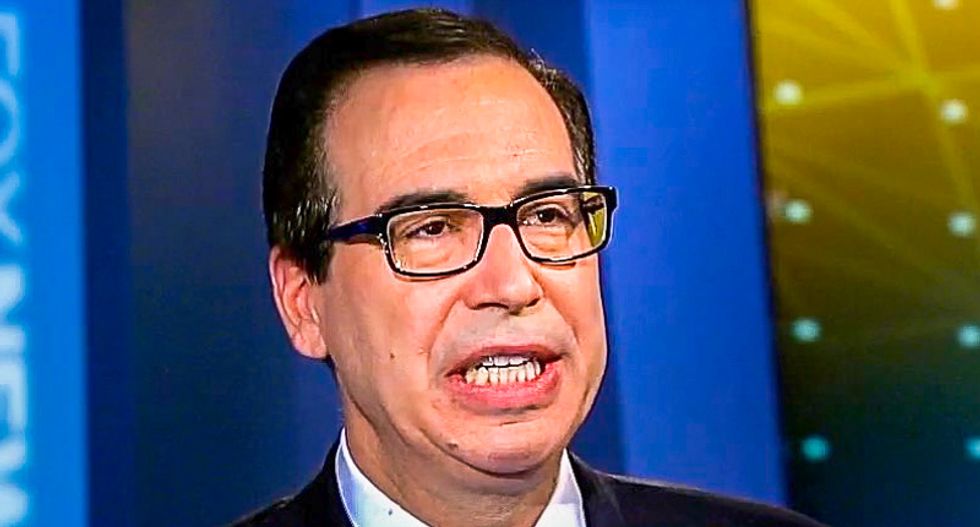 In a deep dive into Steve Mnuchin's past -- and his present as Secretary of the Treasury -- family members expressed dismay and disgust over his relationship with Donald Trump, including Mnuchin's own father who teared up when asked about the path his son has taken.

According to the report from the New York Times, Mnuchin sought out a position in the Trump administration, personally lobbying the president by sharing his history in high finance that made him a wealthy man.

But that has come at a price personally as his family has not only criticized him but publically accused him of racism.

According to the report, a recent encounter at an art gallery between Mnuchin's father, Robert, and a local artist led to the elder Mnuchin to criticize his son.

"One day last year, Howard Saunders encountered Robert Mnuchin at the Matthew Marks art gallery in Manhattan. The two strangers — Mr. Saunders an artist, Mr. Mnuchin a prominent gallery owner and art dealer — struck up a conversation," the Times reports. "It turned awkward when Mr. Saunders realized he was speaking to the Treasury secretary’s father. Sounding disgusted, Mr. Saunders asked Mr. Mnuchin about his son. The elder Mr. Mnuchin appeared pained. 'His politics appall me, too, really appall me,' he replied, according to Mr. Saunders. 'But he’s my son.'"

The report also notes that during an earlier attempt by the Times to get Mnuchin's father to comment on his son "he demurred but seemed to be near tears."

Mnuchin's father is not the only family member displeased with his relationship with Trump.

"Robert Mnuchin’s wife, Adriana, has reminded people that she is not Steven’s biological mother. (The couple married when he was a toddler.) She reluctantly attended Steven’s 2017 wedding to the Scottish-born actress Louise Linton. Ms. Mnuchin pretended her arm was injured in order to avoid having to shake hands with Mr. Trump, according to her grandson Zan Mnuchin Rozen," the report notes.

As for Zan Mnuchin Rozen, in a now-deleted Facebook post he wrote: "my uncle has been complicit in, and in some cases directly culpable for, many years of the marginalization, persecution and stereotyping of black people in the United States.” His actions “cannot and will never be defensible.”