Maddow offers devastating ‘speed’ fact-check on Trump’s speech: ‘A lot of it was wrong — factually wrong’ 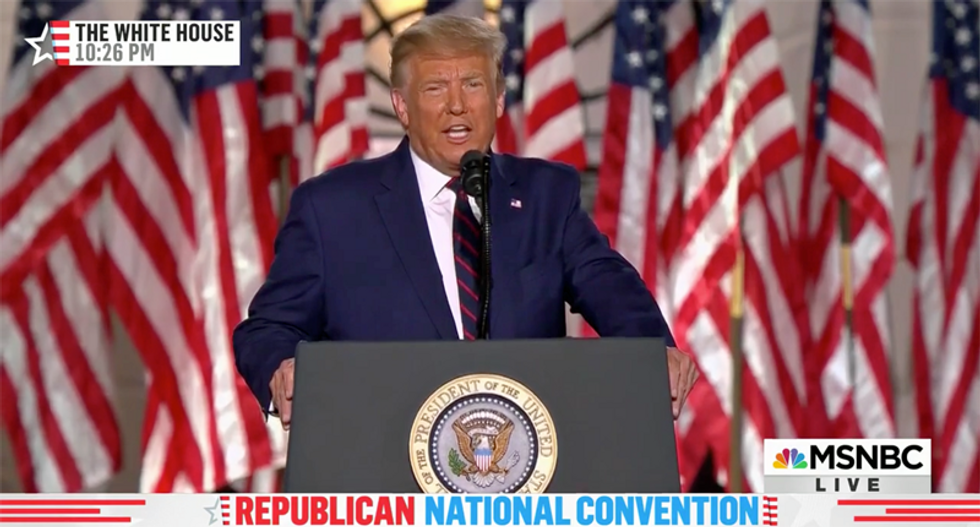 Immediately following the speech, MSNBC's Rachel Maddow gave a fast fact-check of some of the untruths Trump claimed in his speech.

"I think it might be helpful if I just did like a real quick speed-read, auctioneer fact check just on some of the top lines," Maddow said. "This was more than an hour-long speech by the president. We think this is the second-longest acceptance speech ever given by an american president, topped only by the other one that he gave in 2016."

"There was a lot and a lot of it was wrong -- factually wrong," Maddow noted.

She then fact-checked Trump on his false claimed there are "lifesaving therapies" for COVID-19 and America's "disastrously failed testing system."

"When the president said we have pioneered the fatality rate, he was blundering there, but he might have been correct in that blunder," she noted.

"Joe Biden does not support abortion at the time of birth. The New York police department has not endorsed Donald Trump's re-election. There have not been 300 new miles of wall built," she continued.

"It was Barack Obama who signed the Veterans Choice Act," she noted. "Our troops are not coming home."

"Joe Biden has not promised to abolish the production of energy in the United States. Joe Biden will not bulldoze the suburbs," she noted. "This talk about pre-existing conditions in terms of whether or not people can get health care, the Republican Party and the Trump administration explicitly is in court right now fighting to abolish the protections for people who have pre-existing that were part of the Affordable Care Act that's going to be before the Supreme Court exactly one week after the election on November 10th. They are fighting to abolish protections for people with pre-existing conditions."

Democrats in the House of Representatives are finally close to obtaining former President Donald Trump's financial records with Deutsche Bank.

Bloomberg reports that "Trump and House Democrats said in a court filing Monday that they are close to a deal resolving issues surrounding congressional subpoenas of his financial records from Deutsche Bank."

The former Seminole County, Fla. tax collector admitted to six criminal counts -- sex trafficking of a child, production of a false document, aggravated identity theft, wire fraud, stalking and conspiracy to commit an offense against the U.S. -- in a case that led to an investigation of Gaetz for alleged sex trafficking.