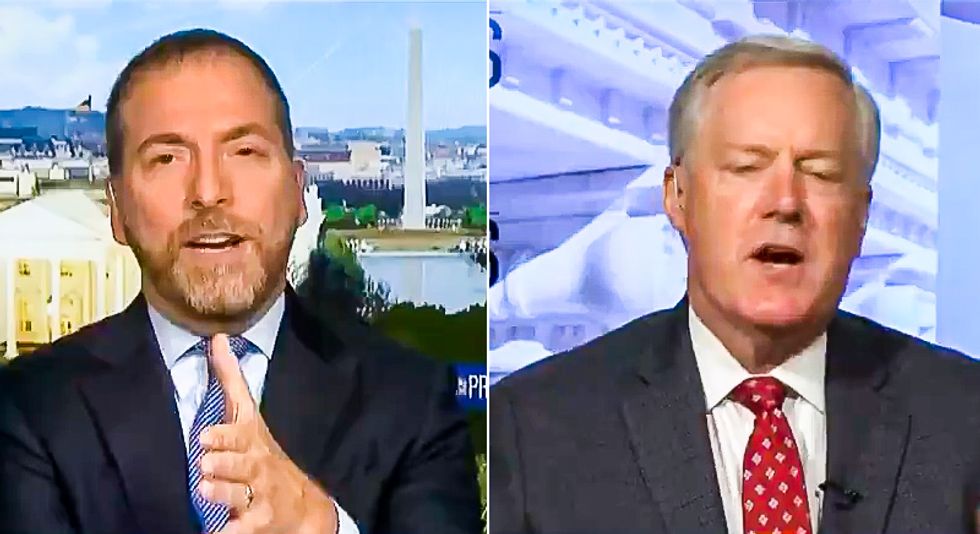 White House Chief of Staff Mark Meadows suggested on Sunday that there are two Americas and "Donald Trump's America" is the "peaceful" one.

"The president painted a picture of what he said would be Joe Biden's America," NBC host Chuck Todd told Meadows, "and I look at the violence this week, this is Donald Trump's America. How much responsibility should voters be giving the president for his inability to keep the streets safe?"

"Well, I mean, you can try to reframe it that way," Meadows replied. "That's just not accurate. I can tell you that when we look at Kenosha and the phone calls that were made to the governor of Wisconsin, we offered help. Help was denied. Obviously, there was multiple gunshots and people lost their lives."

"It's interesting to see you frame Portland that way after 94 days," he continued. "But to suggest that somehow it's been peaceful in Portland, Chuck, is just not looking at the facts."

Todd questioned Meadows about his suggestion that the protests are not part of "Donald Trump's America."

"Are you saying there's parts of the country the president doesn't govern?" Todd wondered. "I mean, is the president only in charge of places where he has supporters? You sort of leveled a weird charge."

"I'm just trying to understand," the NBC host said. "Does the president not believe he has responsibility of governing and leading the entire country."

"He does govern and lead the entire country," Meadows opined. "But, Chuck, you're smarter than that. These are local law enforcement efforts that can be supported by a federal backstop."