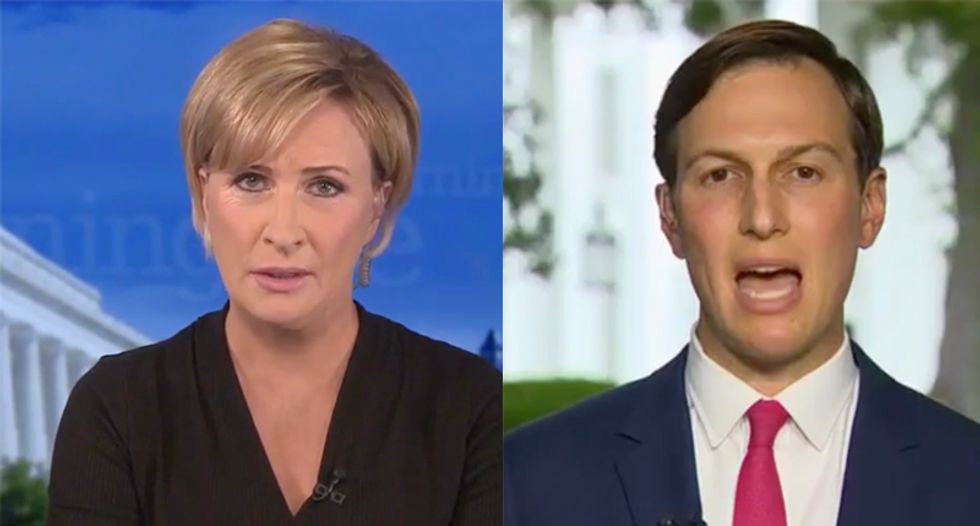 "Morning Joe" co-host Mika Brzezinski lambasted White House senior advisor Jared Kushner on Tuesday morning for boasting on CNN on Monday that the Donald Trump administration has the coronavirus pandemic well in hand and things are looking up.

Contrasting a clip from the Democratic National Convention where Kristin Urquiza told a national audience, “I’m one of the many who has lost a loved one to COVID. My dad, Mark Anthony Urquiza, should be here today, but he isn’t … My dad was a healthy 65-year-old. His only preexisting condition was trusting Donald Trump, and for that, he paid with his life,” with a clip of Kushner speaking with CNN's Wolf Blitzer, the MSNBC host could barely  contain her disgust.

"Wow," she began after silently staring at her monitor. "Jared Kushner just completely rewriting how they responded to the pandemic, which was to not take it seriously and say it was going to go away and to not mobilize the Defense Production Act and get testing nationalized for the people and do contact tracing and do what other countries did to bring the numbers down so kids could go back to school."