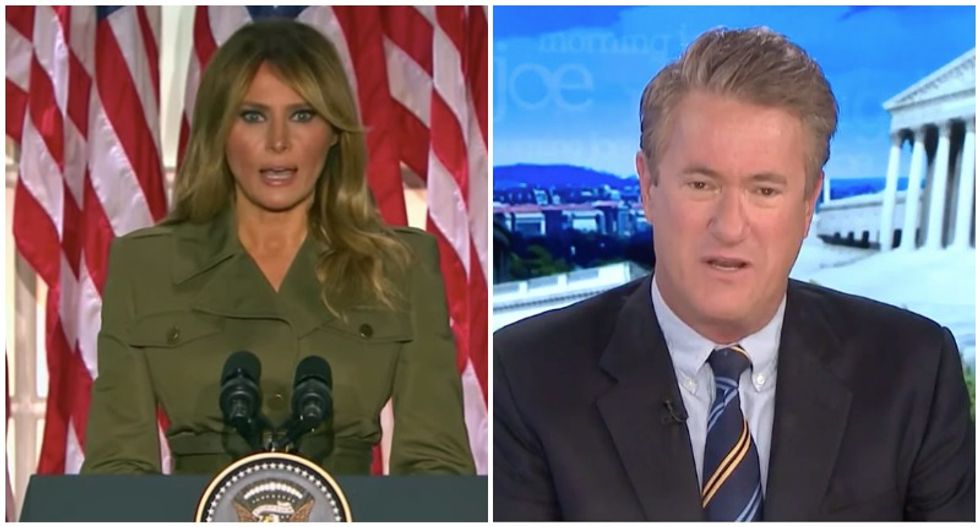 MSNBC's Joe Scarborough marveled at the "absolutely shameless" lies on display in the second night of the Republican National Convention.

Administration officials, outside allies and Trump family members praised the president and attacked his enemies from government property during the virtual event, which was made necessary by the ongoing coronavirus pandemic that White House economic adviser Larry Kudlow declared over.

"The president ever a showman makes official business with campaign politics," the "Morning Joe" host said. "It really was an alternative reality. You had Larry Kudlow talking about the coronavirus in the past tense, you also had Melania [Trump] actually criticizing people who were mean on social media and gossipers. Of course, [we] never heard her criticize her own husband when he said that Mika [Brzezinski] was bleeding badly from a facelift or when I was a murderer or when a woman who had passed away tragically 19 years ago, her husband was begging Donald Trump to stop being so hateful and causing their family extraordinary pain, begging him to stop and he just continued over and over again causing pain for that family."

"Never heard Melania say anything then," Scarborough added. "Never heard her say bleeding badly from a facelift, but somebody used her child's name in a pun and oh, my god -- locusts were descending from the heavens. It was the end of the world. So I guess she's fine with Donald Trump savaging other people every day, causing immeasurable pain, being the most extraordinarily hateful, malevolent force in American politics on a personal level in his constant daily attacks, but she's going to stand up and lecture about gossip? She's inside the house. She's going to lecture about gossip, and she's going to lecture about the meanness of social media? Seriously? Talk about being shameless, absolutely shameless."