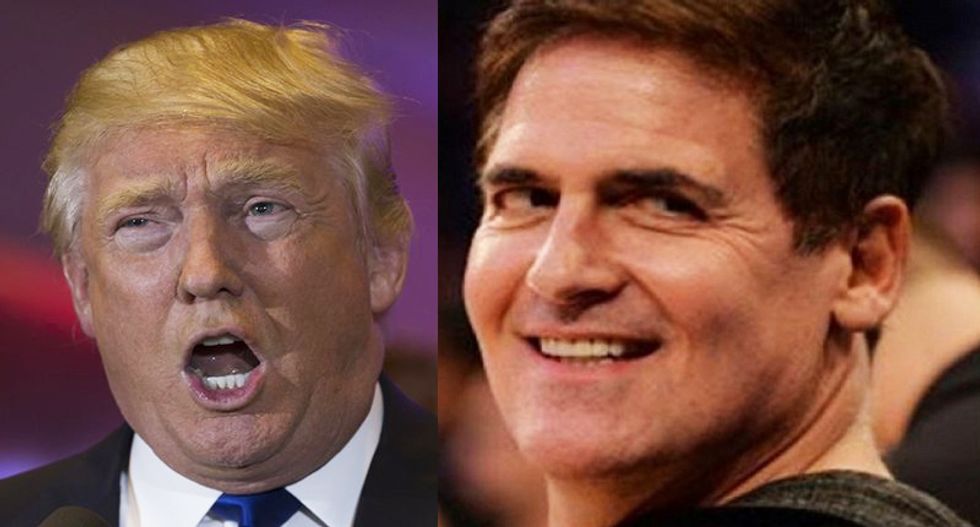 Dallas Mavericks owner Mark Cuban took to Twitter on Saturday night to troll Donald Trump who has attacked the NBA over its stance on Black Lives Matter -- then took a dig at the president's rabid fans on the social media platform who attempted to complain.

Earlier in the week, the president was asked about the NBA canceling games over the shooting of Jacob Blake in Kenosha by a police officer who pumped seven bullets into his back as he tried to get into his car.

On Friday, Cuban threw his support behind the players and took a shot at the president by tweeting, "In 25 yrs when 2020 is reviewed in history classes, no one will discuss the cable-news shows, the President's or anyone's tweets. Students will learn who among us stood up for what is Just, Right and Fair. I'm proud the @NBA and our players will be central to that conversation."

As NBA play began on Saturday night, the billionaire owner of the Texas team took a veiled swipe at Trump by tweeting, "Who’s watching the @nba with me tonight ! Great games so far !!!"

Unknown to Trump fans, Cuban uses a new Twitter feature that blocks all comments which meant that their attacks and responses to his tweet  failed to show up on his feed which is followed by close to eight million fans.

He later added, "When you don’t allow comments, all the trolls and bots with 3 followers that tried to get seen in mentions now can only tweet to their 3 followers. I highly recommend using this feature.”