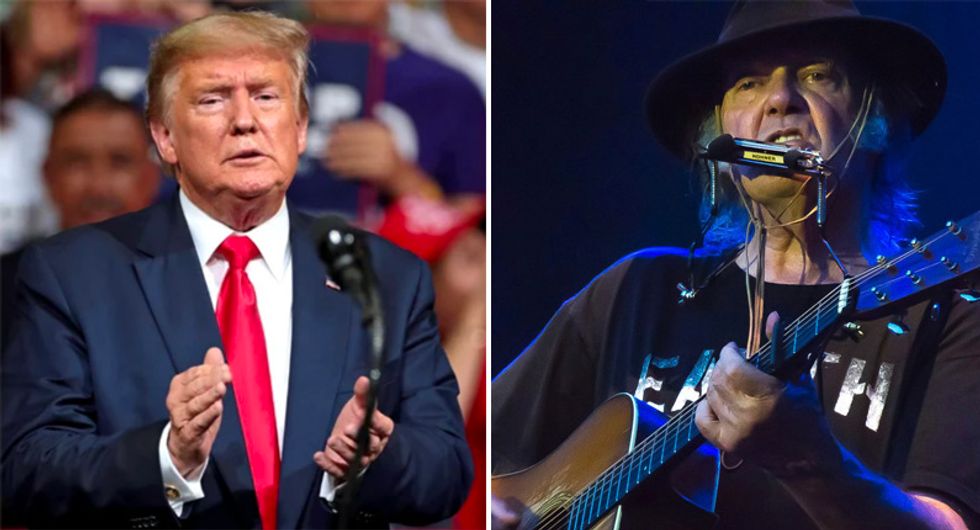 According to a report from Micah Hendler from Forbes, a lawsuit filed by legendary rock star Neil Young against Donald Trump for misappropriating his music for his campaign rallies is going to test a new approach to punishing copyright violations.

As Hendler points out, Young has sued the president for using his songs “Rockin’ in the Free World” and “Devil’s Sidewalk” at his campaign events as recently as weeks ago when they were used at the Trump's disastrous Tulsa rally.

Young's lawsuit claims, "the [Trump] Campaign has willfully ignored Plaintiff’s telling it not to play the songs and willfully proceeded to play the songs despite its lack of a license and despite its knowledge that a license is required to do so," the report states with Hendler adding, "In addition to demanding that the Trump campaign never play any of Young’s songs again at any of its events, the suit asks for up to $150,000 per past infringement."

While Young's lawsuit is not the first filed against the president and his campaign by recording artists attempting to get the president to cease and desist from using their material, Young's attorney is attempting a new approach.

According to Lawrence Iser, a leading intellectual property lawyer, Young's lawsuit will be breaking new ground that may benefit those other artists in the future.

Noting, "One key difference involves the legal distinction between the licenses needed for TV commercials versus live performances," Iser explained to Hendler, "A sync license requires explicit permission of whoever owns the rights to the song—either the songwriter or publisher—in each individual case where their music will be 'synchronized' with any other content."

“In this arena of using songs in commercials, it’s pretty well settled,” Iser explained. “Campaigns understand that they will get sued and they will lose [if they use songs without permission]."

According to Hendler, "However, in live event settings, such as Trump’s Tulsa rally, where the recordings were played over a loudspeaker in a convention center auditorium, the rules are different, and more ambiguous. Such cases require public performance licenses, which are obtained from a songwriters’ organization such as ASCAP or BMI."

"But Young is not suing the Trump campaign based on a claim of false endorsement or right of publicity. He is suing for copyright infringement, a much stronger legal claim, alleging that the Trump campaign in fact never procured a public performance license for his music. The Trump campaign has not issued a statement on the matter, nor did it respond to requests for comment for this article. And ASCAP, the society responsible for issuing a license in this case, has also not spoken publicly on the issue," the report notes before adding that Trump's lawyers would have to prove the campaign procured a license -- which they have not done so far.