Nikki Haley tried to argue the U.S. isn’t racist — but she just proved the opposite point 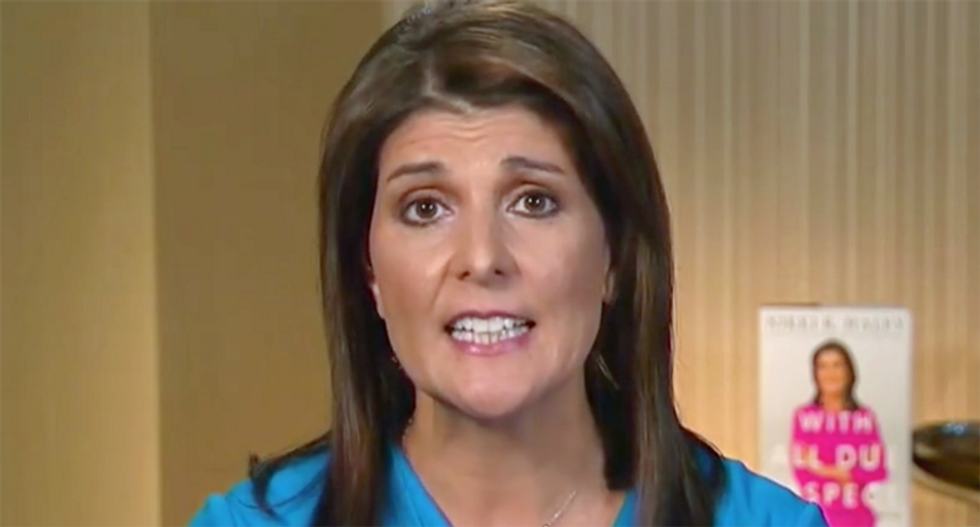 Former Ambassador Nikki Haley (screengrab)
Former Ambassador Nikki Haley delivered one of the starring speeches Monday night at the Republican National Convention, putting a softer face of President Donald Trump's version of conservatism while joining his rallying cry in the culture war. At one point in her speech, she tried to draw a contrast between the GOP and its Democratic opponents by rejecting criticism of the United States and its history of racism.But even as she tried to make her case, she undermined the argument."In much of the Democratic Party, it's now fashionable to say that America is racist. That is a lie. America is not a racist country," she said. "This is personal for me. I am the proud daughter of Indian immigrants. They came to America and settled in a small Southern town. My father wore a turban. My mother wore a sari. I was a brown girl in a Black and white world. We faced discrimination and hardship, but my parents never gave in to grievance and hate. My mom built a successful business. My dad taught 30 years at a historically Black college. And the people of South Carolina chose me as their first minority and first female governor. America is a story that's a work in progress."While she declared from the outset that the United States isn't racist, the story she tells is deeply shaped by the country's racism. Her parents, who she takes time to note wore cultural garb that set them apart in the South, faced discrimination. Her father taught at a historically Black college, institutions which have been necessary in U.S. history because of the extreme racism Black Americans have faced in higher education. She pointed out that she was the first governor from a racial minority in South Carolina's history, a fact notable precisely because it exemplifies how racism has affected who has had access to power.

The last sentence quoted above is the biggest tell. Haley noted that the country is a "work in progress." But what are we progressing from? As her preceding remarks were meant to reflect, we're making progress against racism. But being a "work in progress" means we still have further to go. This is a concession that the United States is still a racist country.

So what's going on here? Why is Haley, undoubtedly an intelligent person, making such an obviously contradictory argument?

The whole night, and likely the Republican National Convention more broadly, is a rather clumsy attempt to thread a needle. Many of the night's speeches were filled with racist fearmongering, most notably from the McCloskeys, a St. Louis couple facing charges for brandishing guns at Black Lives Matter protesters. Rep. Matt Gaetz (R-FL) warned that Democrats want "MS-13" to move in next door.

But while Trump and his allies clearly think that racism is necessary to win in 2020, they want to soften that message so it doesn't scare off voters who might otherwise vote for them. So the night also featured several Black speakers and people of color like Haley, who mostly served to reassure white Republicans that they can support the president without being racist.

Haley also obliquely referenced her decision as South Carolina governor to remove the Confederate flag from the statehouse. But she referred to it only as a "divisive symbol," rather than draw attention to the tension between this action and others at the RNC railing against the removal of statues.

Haley clearly wants to be the future of the Republican Party. So she's trying to walk a fine line of arguing that the country has overcome racism, and may even have more to overcome, while not scaring away the party's white voters. She tells Americans that the United States is not a "racist country," suggesting it's offensive to say so, even as the story she tells confirms that it is.

Sometimes contradictory messages work in politics. A politician may feel the need to say they'll fight fiercely against their opponents, even as they also claim to be a uniter. It's not inconceivable that such messages can be persuasive.

But it's hard to believe that Haley's tactic will gain much traction. It's trying to accomplish too much — wielding the populist and racist impulses in the GOP for her own ends — with too little — hairsplitting wordplay. But it is possible her posturing could help Trump where he needs it the most: comforting white suburban voters that they can vote Republican without being bigots.