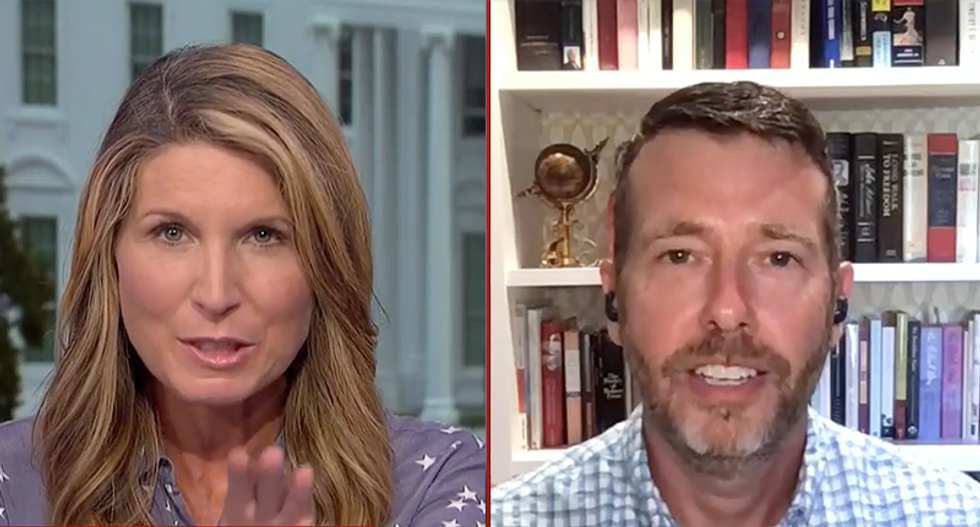 Former strategist to President Barack Obama, David Plouffe, told Democrats that it's time to step up to fight back against President Donald Trump's siege on the U.S. Postal Service.

In a list he posted over the weekend, Plouffe told Democrats to start working on primetime hearings "now," and issue subpoenas to the Trump White House.

Speaking to MSNBC's Nicolle Wallace, Plouffe called out Postmaster General Louis DeJoy's statement that he'll return to normal business after he attempted to slow down the mail.

"I think the DeJoy statement was a defensive PR statement," he said. "I would consider it meaningless until we see a real change. The standard has to be whether it's subscription drugs, Social Security check, letter to a family member or ballot, it's delivered in the same amount of time as last year or the year before, the year before that. There are loopholes about overtime and other things. So, Democrats have to stay on this. Anyone can tell a story today with a phone. You can do compelling video. I would continue the hearings; I would file subpoenas. There's no way the Trump campaign and Jared Kushner are talking to Kanye West and this doesn't go all the way to the Oval Office. This is Trump's desperate strategy on his part to make it less likely for people to vote by mail and to have those votes counted in a timely manner. So, I would think you're going to have a paper trail here, and Democrats ought to be all over it."

He went on to tell Democrats that they can't take their foot off the gas by thinking that they brought DeJoy to Congress to testify and that everything will be fixed as a result of that.

"That is the last thing that Democrats could do," he said.

"I am so glad you said that!" Wallace exclaimed. "Let me go back to the second thing that came out of your mouth. I was waiting for the whole thing. Let me say this, it was a meaningless PR statement! That's what happened today. A meaningless PR statement. You're absolutely right if Jared Kushner can get on an airplane and meet with Kanye West about a fake run for president to siphon off vote from Joe Biden he certainly was involved in a national effort to slow the mail delivery. Just tell me what the investigation looks like. I asked this last night to Elizabeth Warren. There's only 76 days left. I know two members of the House Judiciary Committee asked the FBI to look at this. Slice that piece off for me; I'm trying to find out how far this goes. We know Trump is tweeting about it, obviously, he's talking about it, how do they do that with the short time available?"

Plouffe admitted that an investigation would take a long time, but House Committees have subpoena power, so they can call Trump campaign officials to drive over from Virginia to testify to the House.

"Part of this is to just keep this in the public's eye," he said. "Because I think this will hurt Trump with the public because nobody wants to see the post office degraded. Really maybe 10 percent of his base does. So, I'd keep this in the public eye, keep the pressure on. So, at the end of the day, far as I can tell, Nicole, this is Trump's election strategy. It is not an economic message. He has contradictory messages about Joe Biden; on one hand, he is diminished and has no mental capacity. If he is elected will be drooling in the office. And the other thing is he is such a threat he will destroy everything we stand for. But neither of those is working so his strategy is to cause questions with voters which I think could work, 'I'm not sure my vote will be counted, I'm confused.'"

He noted that despite urgency by leaders to vote early or get the ballot in the mail early, many people will wait until the last minute. It's essential, he said, to ensure that those ballots take five to nine days to get to the counties counting them in time.

"Instead of the two or three, you will have hundreds of thousands of ballots spoiled," he predicted. "So, maybe you're not going to get to the bottom of this by Election Day but this should be the most important thing happening in the Democratic Party or Congress and hopefully will get relief to people economically, but they have got to be focused like a laser on this and not take the word of Louis DeJoy and Donald Trump or anybody else. Because, he's just trying to get through these hearings on Friday or Monday. That's all that statement was."