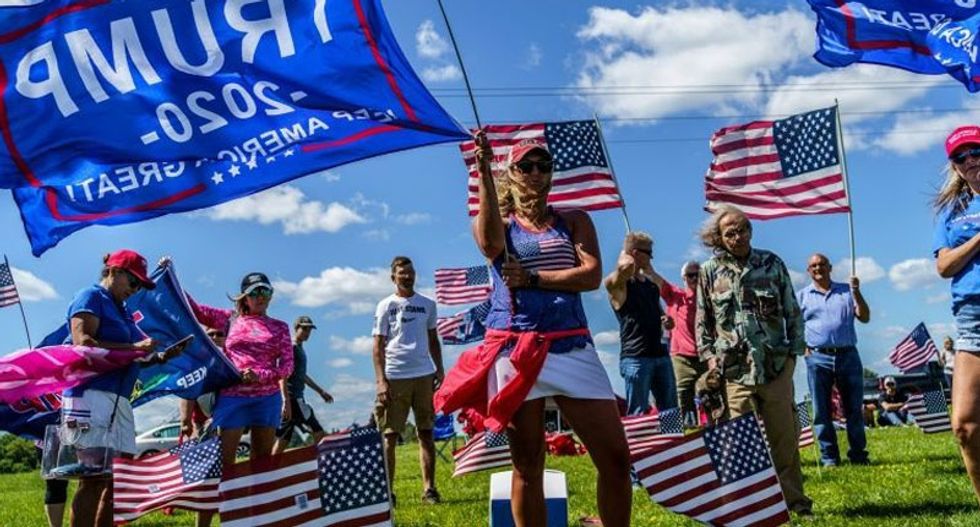 Supporters of the US president wave flags on August 17, 2020 in Mankato, Minnesota as the president delivers remarks on jobs and the economy. (Kerem Yucel/AFP)

A gun-toting man who attended a boat rally for President Donald Trump in Rhode Island over the weekend allegedly accosted another person at the event because he wore a face mask.

The Public's Radio reports that the pro-Trump rally took place at the Colt State Park on Sunday, and park rangers who were working during the event say they were caught off guard by the hostility of some of the rally attendees.

"One attendee -- who carried a handgun on his waist, in violation of state park rules -- allegedly accosted another guest for wearing a mask," reports The Public's Radio. "Another park-goer, who had a rainbow pride pin on their bag, was called a homophobic slur. Some attendees also threatened to tip over a park ranger’s truck."

One park ranger, who asked not to be named, said they had no idea there would be a large boater rally for the president until it happened on Sunday.

“I did not realize that this event was happening until basically the park was full of people flying Trump flags,” the ranger said. “There was no preparation for it, and then we basically got left out to fend for ourselves."

Mike Healey, a spokesman for the Department of Environmental Management, tells The Public's Radio that they received "maybe one or two 911 calls during the event, but they were mostly about verbal incidents."