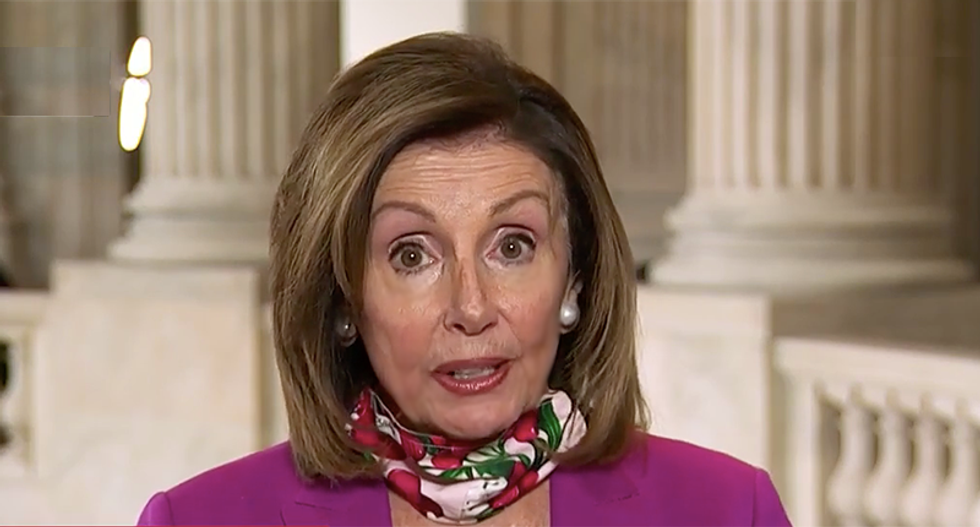 MSNBC's Andrea Mitchell noted that the House passed a $25 billion Postal Service funding bill that the GOP-led Senate said it would not even vote on. A Reuters/Ipsos poll last week found that 78 percent of Americans, including 92 percent of Democrats and 67 percent of Republicans, agreed “a well-functioning United States Postal Service is important to having a smooth and successful election during the coronavirus pandemic.” Still, the Republican Party refused to stop the U.S. mail slowdown.

President Donald Trump claimed that if Congress passed a "freestanding bill" on the funding of the U.S. Postal Service that he would sign the bill.

"Sure, if they gave us what we want. And it’s not what I want, it’s what the American people want," Trump said during a news conference Aug 14.

Pelosi explained that the Democrats did exactly what Trump asked but now he's claiming he won't sign the bill.

"So, let's not predicate anything on what he says or does, because the association with fact, with science, with ethics, with what is right to be done for the American people, is a completely foreign notion to this president," Pelosi said.

The Postal Service, Pelosi continued, "affects every family in America. I don't think members on either side of the aisle or either side of the Capitol can tell you that they've ever had such an immediate reaction to a change in how an agency affects their lives. This is not a business, they keep saying it keeps losing money. It's a service. It's a service that largely pays for itself as it meets the needs of the American people. And what they are doing is wrong. What they're saying about it is not true. And what we will have to do is hold them accountable."

She went on to address the committee hearing Monday, saying that it became clear that DeJoy didn't want to plug in the sorting machines that were taken offline. However, he did say that if the government gave him $1 billion he would do it. Until then, the sorting machines will continue to be held hostage.

"It's not only a matter of time and holding up the mail," Pelosi continued, "it's a matter of workplace safety as well in terms of what kind of people can work in the post office if that kind of machinery is not available. So, it excludes some from that. So, in every possible way, they are sabotaging the mail. They're harming our democracy. They're injuring the health of the American people, starting with our veterans. And they will be held accountable. But in terms of the election, we don't agonize, we organize. And we will make sure that people have a plan to vote, they vote early enough so that they're not counting on any of the president's henchmen to deliver their mail on time."

Mitchell asked if Pelosi thought that DeJoy was qualified to do the job, given that he's the only Postmaster General in two decades not to have ever worked in the USPS.

"Well, if the qualification is that you're a mega-donor to Donald Trump and chair his Inaugural Committee, that's the criterion, then he qualifies," said Pelosi. "But on the basis of knowledge of the system, he's known how to profit off of it. He's known how to compete with the post office. He just doesn't share the value of it being an all-American service to the American people, written into the Constitution. Our first postmaster general, Benjamin Franklin, Abraham Lincoln was a postmaster, Harry Truman was a postmaster although he yielded the position to a widow who needed the money when he was a postmaster. This is as American as apple pie, baseball, you name it, except when it comes to these guys who want to privatize it, make a profit off it, all they care about is 'show me the money' for them, instead of show me a service for the American people."

She concluded he's the wrong person for the job and there should be some scrutiny over who is chosen for such positions.