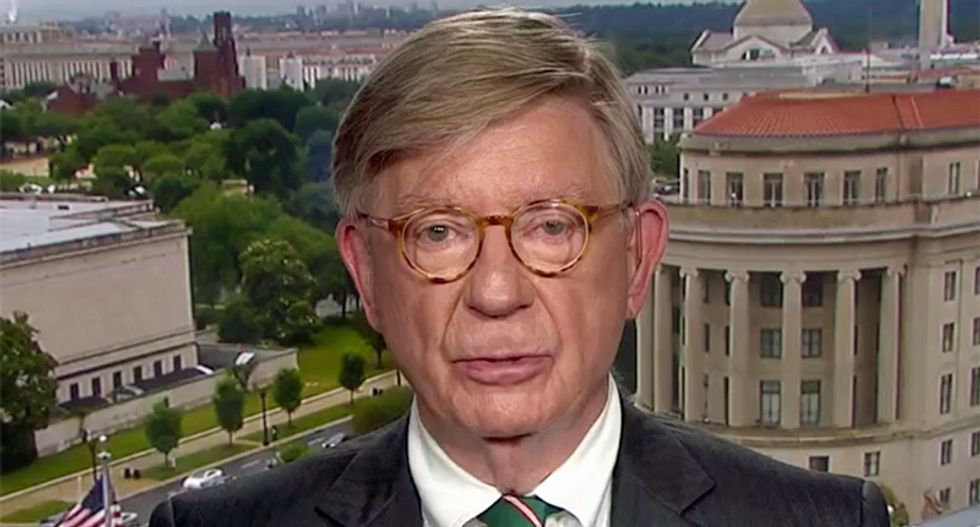 In a long appraisal of the American conservative movement on MSNBC's "Morning Joe," longtime columnist George Will hammered away at his ideological brethren for blindly following Donald Trump and turning to a "cult of victimization" lacking any principles at all.

Sitting in with co-host Joe Scarborough, author Anne Applebaum, and conservative commentator David Frum, the state of conservatives over the past three and a half years was dissected with Will expressing deep disgust at what Trump has done to the Republican Party.

"Donald Trump setting out to make America great again, set out to make America more European in the sense it has injected this tribalism and made it normal in our politics," he elaborated. "This coincided with the fact that a lot of American conservatives are shocked because they are Christians and the society is increasingly secular. Third, American conservatives have bought into the cult of victimization -- they like to feel they are put upon by academics, Hollywood, the media and all the rest and they are an embattled minority in their own country. This makes for a very toxic group."

"I'm just curious," Scarborough stated. " The thing I have the most trouble with are those colleagues that I came to Congress with in 1994 and we were fighting for conservativism, for balanced budgets, for -- to hold China and Russia and others accountable when it came to human rights. You could go down the list because you reported on us. Yet so many of those same people are remaining silent as Donald Trump -- well, Donald Trump this weekend said we're not going to fund [the Post Office with] an approval rating of 90 percent of people, then people will be able to vote by mail, and silence on the Republican Party side. How have you come to grips with this, how have you come to terms with this?"

"Well, silence would be an improvement for some people," Will quipped. "Leaving that aside, the bad news and the sort of good news are linked. The bad news is, is that when people have, as the congressional Republicans have done, shed so many principles so fast, so thoroughly over 3 1/2 years, you begin to wonder if they know what it is to be principled at all."

You can watch below.