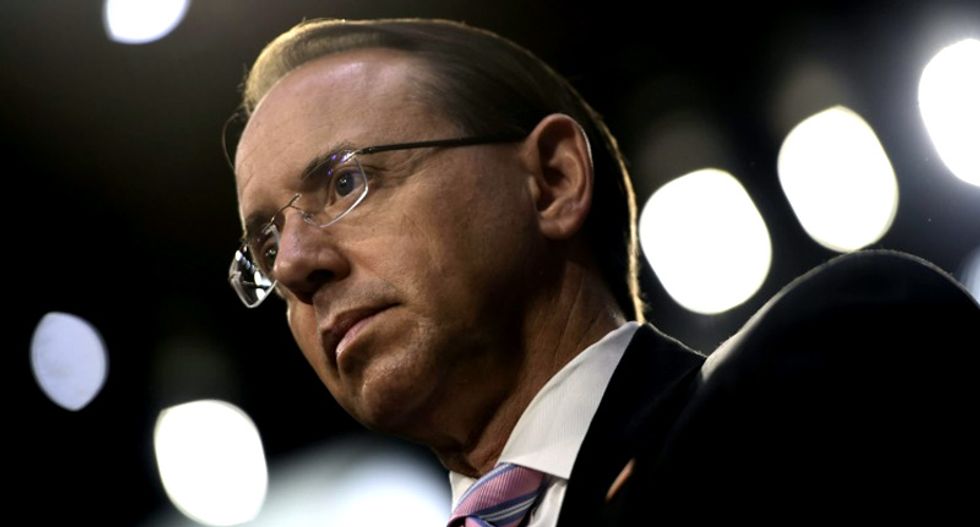 According to a report from the New York Times, former Deputy Attorney General Rod Rosenstein had a hand in limiting the scope of special counsel Robert Mueller's investigation into ties between Donald Trump's 2016 campaign and the Russians by secretly curtailing an FBI counterintelligence probe.

The report from Michael Schmidt of the Times begins by stating, "The Justice Department secretly took steps in 2017 to narrow the investigation into Russian election interference and any links to the Trump campaign, according to former law enforcement officials," before adding, "But law enforcement officials never fully investigated Mr. Trump’s own relationship with Russia, even though some career F.B.I. counterintelligence investigators thought his ties posed such a national security threat that they took the extraordinary step of opening an inquiry into them."

The report points out that acting FBI director Andrew McCabe had given the go-ahead to open the investigation over concerns over foreign interference, but Rosenstein felt he had a conflict of interest and that the probe could not be justified.

"Mr. Rosenstein determined that the investigators were acting too hastily in response to the firing days earlier of James B. Comey as F.B.I. director, and he suspected that the acting bureau director who approved the opening of the inquiry, Andrew G. McCabe, had conflicts of interest," Schmidt wrote, adding, "Mr. Rosenstein never told Mr. McCabe about his decision, leaving the F.B.I. with the impression that the special counsel would take on the investigation into the president as part of his broader duties. Mr. McCabe said in an interview that had he known Mr. Mueller would not continue the inquiry, he would have had the F.B.I. perform it.

According to McCabe, "We opened this case in May 2017 because we had information that indicated a national security threat might exist, specifically a counterintelligence threat involving the president and Russia. I expected that issue and issues related to it would be fully examined by the special counsel team. If a decision was made not to investigate those issues, I am surprised and disappointed. I was not aware of that.”

The Times notes that Rosenstein did not respond to questions about the report.