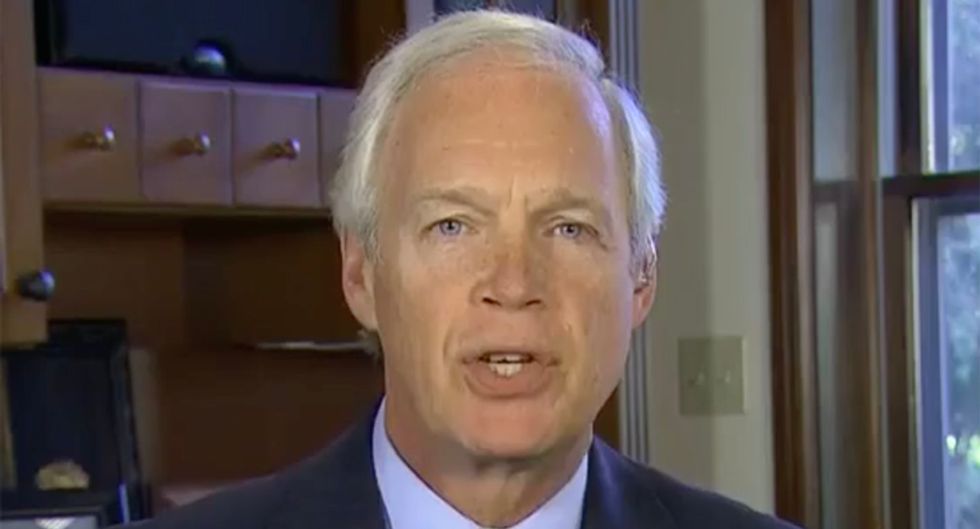 Late in a long interview with CNN's Dana Bash, Sen. Ron Johnson (R-WI) was confronted by the "State of the Union" host with a report from a Republican-led Senate committee that stated Russia was behind misinformation about Democratic presidential nominee Joe Biden -- and then was pressed on why he is still pushing forward with his own investigation on the same claims.

That led the Republican senator to push back and claim the Biden conspiracy theory hasn't been debunked and try and tie the Democrats to Russia.

"I want to ask you about something you're involved in right now, " Bush began. "You are investigating whether or not Ukraine was involved in 2016. I want to read to you something from the Senate Intelligence Committee's report suggesting that speculation about Ukraine interference is Russian misinformation. 'The committee observed numerous Russian government actors from late 2016 until at least January 2020 consistently spreading overlapping false narratives which sought to discredit investigations into Russia interference. The committee identified no reliable evidence that the Ukrainian government interfered in the 2016 U.S. election.'"

"This is the Republican-led committee in the Senate saying this and you're still investigating the claims," she continued. "My question is: why are you spending time doing this when it -- the theory that Ukraine was involved has been debunked?"

"First of all, first of all, you know, that's your typification that it has been debunked," Johnsons shot back.

'It is not mine," Bash protested. "They worked for two years on this investigation and these are your Senate Republican colleagues --."

"Are you going to let me answer?" Johnson interrupted.

"I just want to say this is not my opinion, this is something that came out of the Senate," Bash corrected him.

Saying "...the corruption of the Obama campaign or administration goes back to March of 2015 -- our investigation is quite wide-ranging," Johnson disputed his colleagues' report and then accused Democrats of being in league with Russia.

"The only Russian disinformation that I'm aware of that has been involved in our politics is, first of all in the Steele dossier and now Democrats inserting it into our records based on a false narrative that they created and leaked to the media and didn't even tell Sen. Chuck Grassley and I about it," he exclaimed. "The Democrats, again, they are being Putin's puppets. Not me, not Chuck Grassley."