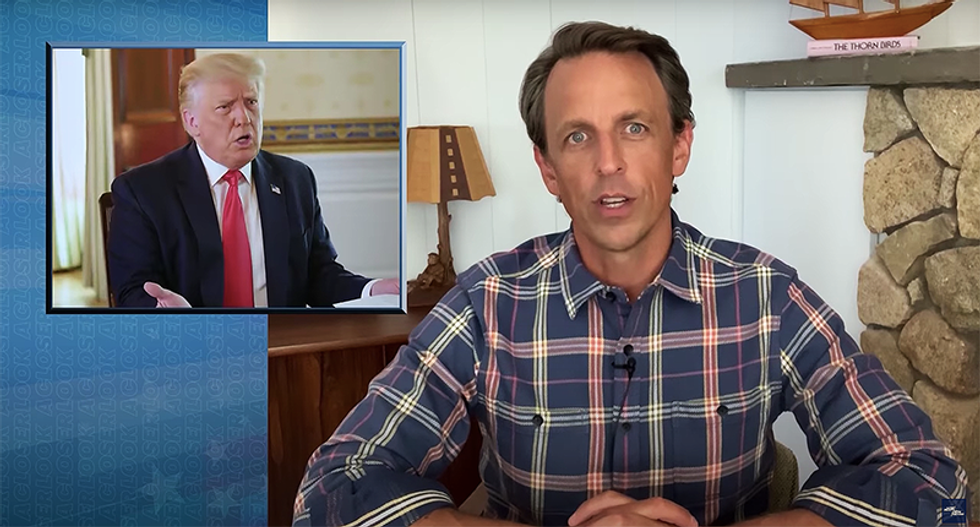 "You know something has gone horribly wrong when a journalist interviewing the president looks like that," said Meyers. "That's the face you make when your dad gets drunk and decides to tell you about the night you were conceived."

The host noted that it should have been obvious that Trump was about to stage a nutty when he came in carrying papers. When he whipped them out, "it was somehow worse than you were expecting."

He then dissed the "fakest-ass looking chart," Trump had with bars he thought looked a lot like a printer's test sheet.

"This looks like a prop they'd give a fourth-grader playing a businessman in a school play," said the host. "I'm pretty sure this is what George Costanza handed out when he was trying to get donations to The Human Fund."

Meyers explained that it's an established fact that Trump has a "bad brain," remarkably similar to hours-old scrambled eggs sitting out at a breakfast buffet at a hotel. "All the hot sauce in the world can't save it."

He then recalled the hilarious moment this week when Trump "belched out" the incorrect pronunciation for Yosemite as "Yo-Semite."

"Yo-Semite is how Sean Connery would pronounce the category on SNL Celebrity Jeopardy," he joked. "Maybe, he'll be just as awed at the Hover Dam, or the Statue of Library or the Yell-Aloe Stone Park. It's like being at a restaurant with your dad the first time he spots quinoa on the menu."

Meyers couldn't understand how Trump has never seen or heard the name "Yosemite" before that he got it wrong twice. He noted that Trump isn't a Russian spy but if he was, calling it "Yo-Semite" would be "a dead giveaway." Then there was the hilarious moment that Trump tried to explain what the Secretary of the Interior actually does.

"He loves it!" Trump announced. "He loves the interior!"

"He loves the interior? What is he in charge of national parks or the inside of a car?" joked Meyers, speculating that Trump must have been confused hearing the word "interior" but talking about "a bunch of outside places."

"This is why Trump rarely steps outside his right-wing bubble," the host joked.