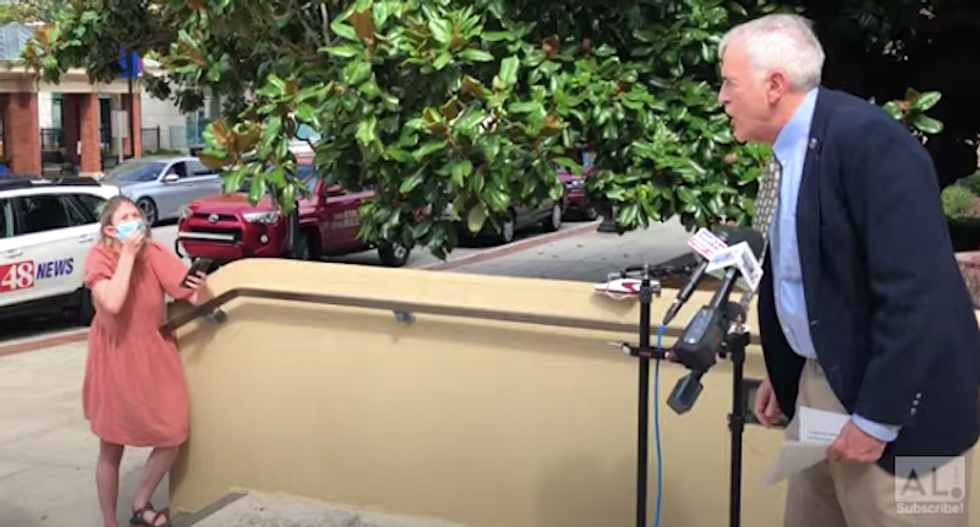 Hecklers drowned out speakers defending a Confederate monument during a news conference in Alabama.

John Scales struggled to be heard as protesters raised their voices even louder while he offered a defense of keeping a Confederate monument in place outside the Madison County Courthouse in Huntsville, reported AL.com.

“Would you allow me to speak or are you going to try to take over?” he said in exasperation.

Jane Adams, who seemed to be the loudest heckler, told Scales she had a constitutional right to be heard.

“Some have said it is a moral imperative to move this (monument),” Scales told reporters at the press conference. “But the problem is morality must be based on truth and the story that (soldiers) fought for slavery is absolutely, unequivocally false.”

“That is not true!” Adams screamed.

“I don’t know if you guys want to put up with this or not," Scales said, turning to his fellow members of the Historical Protection of North Alabama organization.

The next speaker didn't fare any better, and complained the three hecklers in attendance were "haters.

The county commission, which has jurisdiction over the monument, has tried to remove the statue that has been damaged by vandals and protested by business leaders.

“It’s obviously going to take some professional reconditioning of that monument, the damage that’s been done to it,” said commission chair Dale Strong. “What we’re trying to do is proceed with the preservation, the relocation, that’s where we’re going right now. I do hope at a later date, it will be repaired.”

The state legislature prohibited the removal of Confederate monuments in 2017 except for temporary relocation for emergency repairs, and requires their return within one year, but Historical Protection of North Alabama wants it to remain no matter what.

“We don’t deny the South was fighting for slavery,” said group member Ed Kennedy. “That’s a political issue, but the soldiers on the battlefield were not fighting for that reason.”

Adams disagreed, and read excerpts from the so-called "cornerstone speech" Alexander Stephens, vice president of the Confederacy, in March 1861, a month before the Civil War began.

“Upon the great truth that the Negro is not equal to the White man," Stephens said at that time, "that slavery is subordination to the superior race is his natural and normal condition.”

Adams said that was reason enough to take down monuments honoring the Confederacy and its soldiers.

“They lost, and not only did their lose, their ideas and their principles lost out,” Adams said. “Slavery lost out. It should go.”