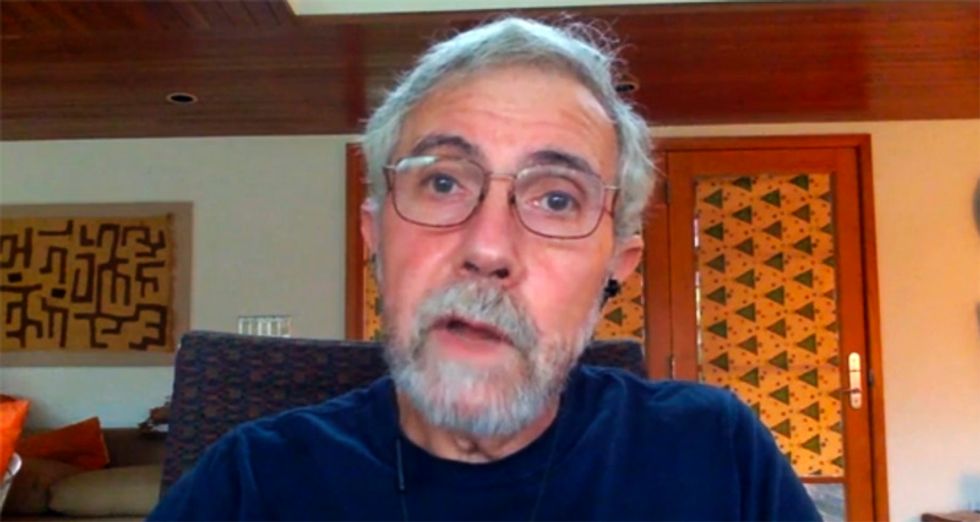 Speaking to CNN on Sunday, Nobel Prize winner Paul Krugman explained that the things President Donald Trump did on Saturday would provide little help to Americans desperate to survive amid a worse recession since the Great Depression.

Amid the coronavirus crisis, the U.S. entered another recession, and jobs were lost so quickly by the shutdown that the unemployment rate soared to 14.7 percent. In the 2007-2008 recession, the rate tapped out at 10 percent. The highest U.S. unemployment rate was 24.9 percent in 1933 during the Great Depression and the Dust Bowl.

"This new thing, what it is, is both limited and it calls for a new program," said Krugman about Trump's proposal. "It calls for complicated actions from the states. More money. And one thing we learned it's that our unemployment insurance system in this country is not designed to do complicated things. The virtue of the last round was that it was very, very simple. Just $600 a month and even so, a lot of people took a long, long time before they got those benefits."

Now Trump is proposing that the states set up something new, use their bureaucracy and outdated computer programs to make it all work in a few weeks before the money works out.

"This is just not going to happen," Krugman insisted. "This is completely -- this is something thrown together by somebody who has paid no attention to how these things actually work. What it actually takes to get out money to people in need. My concern, which is we're going to see a collapse in consumer spending because people are desperate -- isn't delayed at all by this."

CNN's Jim Acosta noted that it would likely spur a lack of faith in the system, and people might pull back their spending out of fear that it won't work.

"Actually, if people understood how it would or actually how it doesn't work, it would be even worse because there's nothing coming," said Krugman. "For most people, there will be no relief. Let me also say something about the payroll tax, which is -- the amazing thing there is that is a really known bad idea. Even Senate Republicans basically said, 'Let's forget about that. That's a really stupid idea.' And then Trump comes out with it. Saying that this is the hydroxychloroquine of economic policy. It's a known quack remedy that everybody who knows anything has said is useless and dangerous, including Republicans."

Krugman explained that the two together, an unworkable unemployment plan and a destructive payroll tax plan, are enough to make him "extremely worried" and warn that "a greater recession [could] come from it."