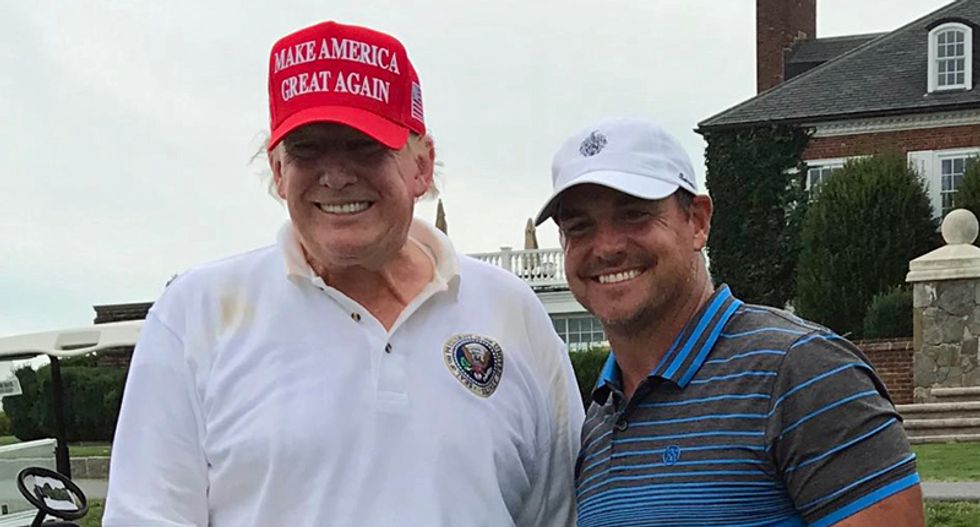 The president of the United States was not in Washington, DC to respond to the pandemic or work to revive stalled negotiations over an additional stimulus bill, but was instead spending another weekend golfing at Trump National Golf Club Bedminster.

HuffPost White House reporter S.V. Dáte, who has been tracking Trump's time on the links, reports it was Trump's 86th day golfing at Bedminster, with 269 total days spent at golf course out of Trump's 1,304 days in office.

Dáte noted that since the reports of Russia paying bounties broke, Trump has spent 14 days golfing while only having 4 days with his daily intelligence briefing on the schedule.

Jay Feely, a former football kicker, posted a photo with the Donald Trump on Saturday, saying that he was golfing with the president during the pandemic. The photo features Trump wearing a red hat with "Make America Great Again" in large letters.

Had the distinct honor to play golf today with @POTUS and be his partner! Truly enjoyed talking about our familie… https://t.co/NZAT7GCZYi
— Jay Feely (@Jay Feely)1597526136.0

Feehy, who played arena football after college, was a Pro Bowl alternate for the NY Giants in 2005.

This was not the first eyebrow-raising photo Feely has posted on Twitter. In 2018, criticized for posting a prom photo with a gun.