Trump and Texas Republicans are in big trouble as voters flee them: WaPo reporter 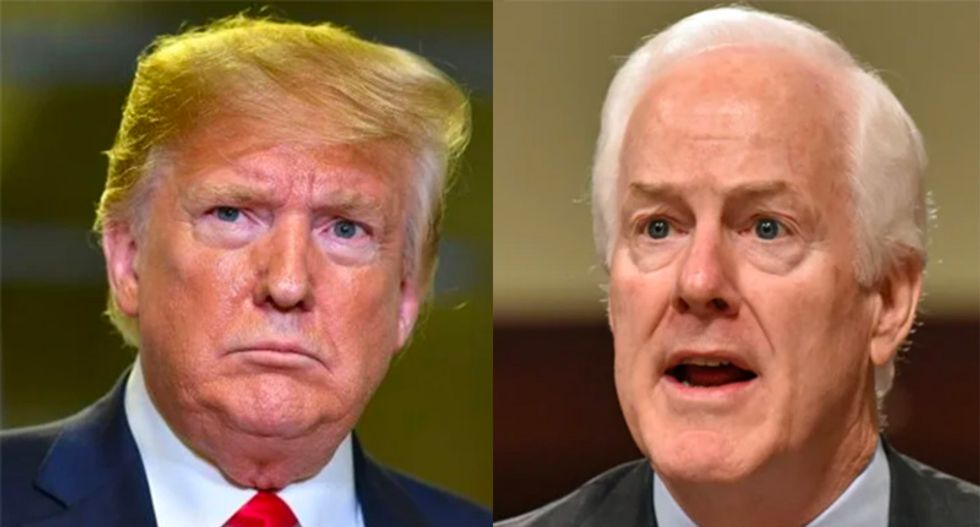 Speaking with MSNBC's "Morning Joe" host Joe Scarborough, Washington Post White House correspondent Robert Costa said Donald Trump and Republicans on the ballot in Texas are facing a battle in November and could face a stunning defeat in the normally conservative state.

With Scarborough ticking off a list of Republican senators who are trailing in the polls -- some them badly -- Costa said GOP problems in Texas illustrate how badly the election could go for Republicans.

"Let's go to the heart of Texas," Scarborough prompted. "Who would think you'd be talking about Texas in 2020, August, and the president is either tied or behind there if you believe the Dallas poll out a couple weeks ago. [Sen.] Ted Cruz is telling reporters it's a competitive state. You have [Sen.] John Cornyn running for re-election that's not going to be a walk. and yet you have Ted Cruz trying to stop any relief bills along with [Sen.] Tom Cotton (AR) and others running for president in 2024. What does that do to John Cornyn in the state of Texas, especially with Houston now seeing coronavirus cases still exploding and up to a 20 percent positivity rate there for testing?"

"You're so right to pay attention to Texas," Costa replied. "I was with the president in Texas last week. There's this image politically of Texas being this rural state and I was in Odessa, Texas, home of "Friday Night Lights," covering President Trump."

"When you look at Texas politically, I love being in Odessa and Midland, but that's not necessarily Texas when you look at the political map, it's major metropolitan areas in Texas," he added. "It's in many ways a suburban state. Dallas, Houston, other major metropolitan areas in Texas. Those voters in 2018 and recent other years really moved the state more to the left. You see Senator Cruz is right when he says it's a battleground state. But Governor [Greg] Abbott (R) he is sticking with President Trump."

"This is a state we've seen in many suburban races it's starting to turn and that makes President Trump have to run up the numbers in the rural areas," he elaborated. "But for someone like John Cornyn who's never going to reach the 90 percent Republican votes in the rural areas, when you're running with Trump how do you balance out in the suburbs? It's going to be tough for him and others."

According to a report from CBS, former Vice President Biden's campaign senses Republican weakness in Texas, and is reporting they are hiring "a slate of staff hires aimed at flipping the historically conservative Lone Star State, last won by a Democratic presidential candidate in 1976 by Jimmy Carter."