Trump may end his campaign rallies out of fear of 'empty seats' as coronavirus scares away his supporters: report 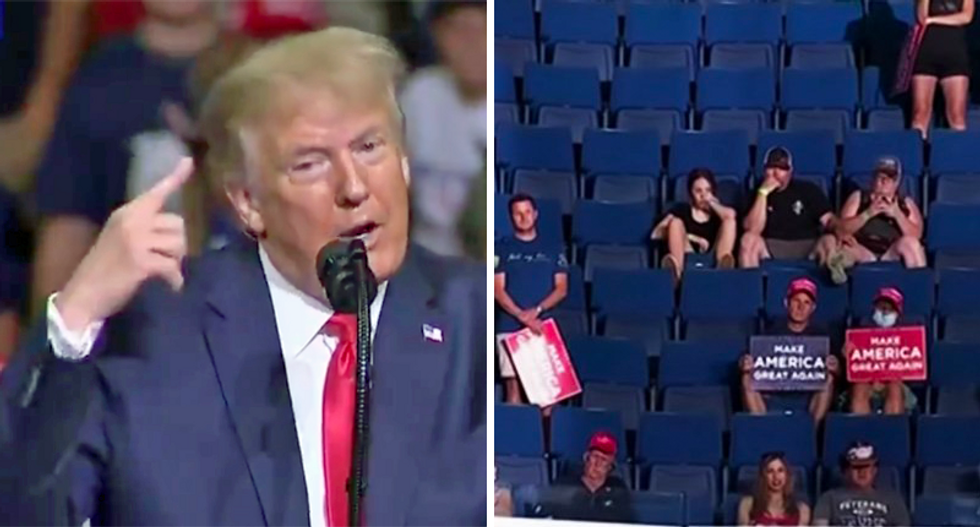 The Trump campaign is struggling to modify their campaign strategy during the coronavirus pandemic.

"The Trump rally may be a thing of the past. At the least, the signature stew of tribal politics, showmanship, insults, outrage, humor and hero worship that propelled Donald Trump’s improbable victory four years ago and that has punctuated his presidency with the trappings of a perpetual campaign, is on a break," Anne Gearan reported for The Washington Post on Thursday.

"Trump appeared to declare the end of the rally era Tuesday. He said the events — the success of which he has always measured by the size of the crowd and the 'ratings' — are a casualty of the coronavirus pandemic. Or more exactly, of the dispiriting optics that proper social distancing would mandate," Gearan explained.

“You can’t have empty seats,” Trump said. “You know, if I had five empty seats — for instance, they said, ‘Would I do a rally, sir?’ The reason I won’t do them [is] because, ‘You can have one seat and then seven around that seat, sir, have to be empty.’ ”

"I’d love to do the rallies. We can’t because of the covid. You know, you can’t have people sitting next to each other,'" Trump told right-wing radio host Hugh Hewitt.

It is not just social distancing, it's also fears of low turnout.

"In June, Trump held a thinly attended campaign rally in Tulsa despite warnings from health officials about the increase in coronavirus cases in Oklahoma. A number of campaign staff members at the rally site tested positive and the president was livid that the news became public, according to people familiar with his reaction, who spoke on the condition of anonymity to reveal internal discussions. Although Trump did not say so, the empty-seats problem is also partly a function of reluctance on the part of some his supporters to expose themselves to potential infection," The Post noted. "A planned July rally in New Hampshire was scrapped out of what the Trump campaign said was caution over an approaching storm, although forecasts suggested there was little risk. The day dawned sunny and warm, and the state Democratic Party said the weather amounted to a spurious cover story. The campaign said the event was merely postponed, but it has not been rescheduled."

The report noted the campaign was expecting to be holding "multiple rallies weekly by this point in the race."