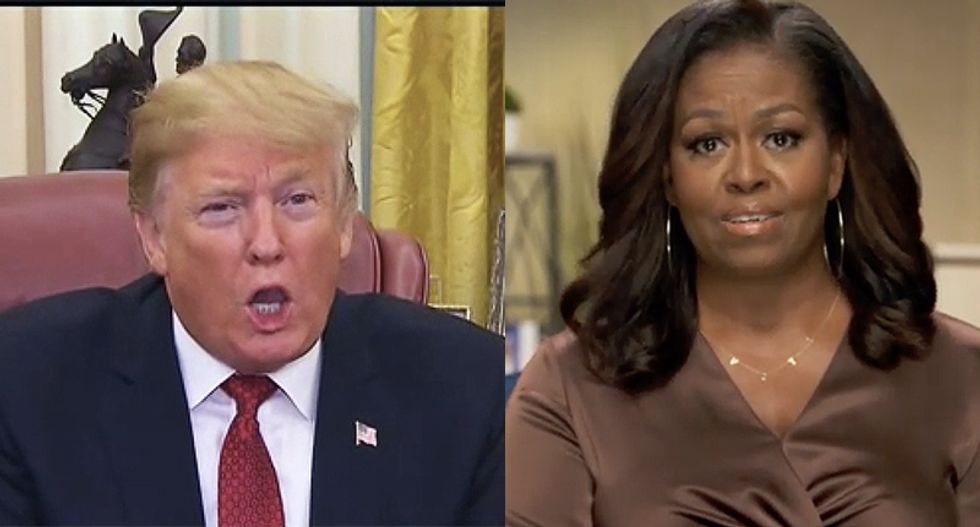 President Donald Trump went on the attack against former first lady Michelle Obama after she spoke at the Democratic National Convention on Monday night. He attacked her for taping her address instead of doing it live, calling her "in over her head."

Trump's attack that landed flat was the idea that she got the COVID-19 fatality numbers wrong. Because the numbers are moving up so quickly, they were already at 170,000 dead by the time her video aired.

"She taped it and it was not only taped, it was taped a long time ago because she had the wrong [COVID-19] deaths," said Trump, during an event celebrating women's rights.

As lawyer Jill Filipovic pointed out, mocking Obama because fatality rates are actually higher than Trump thinks doesn't quite attack Obama the way he likely wanted.

In his Tuesday column, Washington Post columnist Greg Sargent characterized the feud by saying it shows that Obama "drew blood." Otherwise Trump wouldn't care so much.

See the other responses below:

Trump attacking Michelle Obama while he supposedly commemorates the history of women is exactly on point.
— Janet Johnson (@Janet Johnson) 1597759465.0

At a White House event where Trump pandered to people who don't know better with a pardon for Susan B. Anthony to p… https://t.co/Pwa2kbO25U
— Amee Vanderpool (@Amee Vanderpool) 1597758766.0