Trump really does have a second-term agenda — and it's terrifying 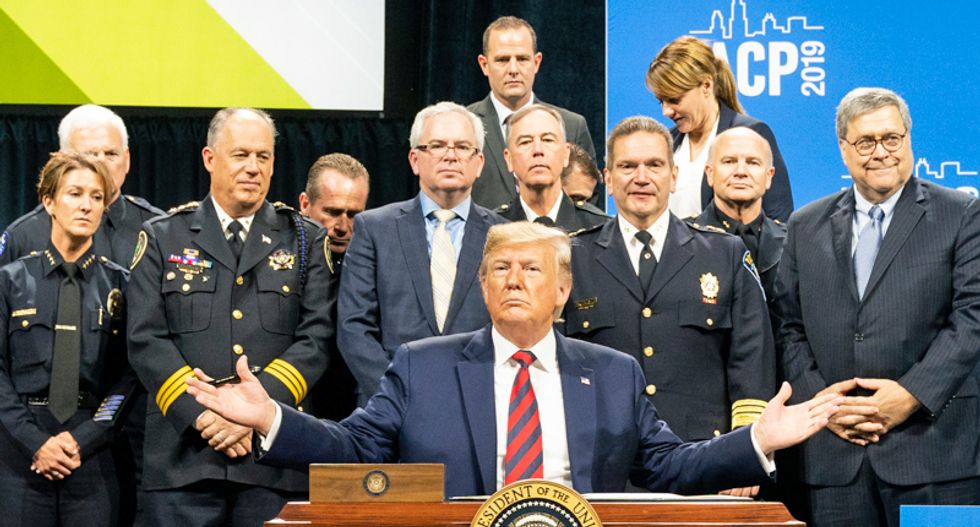 When President Donald Trump was asked by his friend and Fox News host Sean Hannity in June what he would do in a second term, it did not go well. He gave a rambling, self-obsessed answer that presented no policy objectives, no vision for the future. It was so bad that he faced criticism from within his own party, and Hannity gave him a second chance. This time, Trump was able to name a few policy objectives, like defeating the coronavirus and rebuilding the economy, but still gave no sense of a distinctive vision for the Republican Party's agenda.

Though many pundits have long since given up on the idea that Trump's poor performance will hurt him among his supporters, these answers were widely viewed as a significant problem for him. And they may be — winning re-election happens on the margin, and Trump's inability to give purpose to his candidacy may fail to inspire otherwise gettable voters.

But some pundits drew another lesson from this episode, one that was codified in a new piece from Politico on Monday by Tim Alberta. In "The Grand Old Meltdown," the reporter who has spent much of his life covering the right wing confessed that he is unable to express what the party stands for anymore.

"The supposed canons of GOP orthodoxy—limited government, free enterprise, institutional conservation, moral rectitude, fiscal restraint, global leadership—have in recent years gone from elastic to expendable," he said. "Identifying this intellectual vacuum is easy enough. Far more difficult is answering the question of what, quite specifically, has filled it."

He even called up Frank Luntz, a prominent GOP pollster, who expressed similar bafflement. Alberta concluded:

It can now safely be said, as his first term in the White House draws toward closure, that Donald Trump’s party is the very definition of a cult of personality. It stands for no special ideal. It possesses no organizing principle. It represents no detailed vision for governing. Filling the vacuum is a lazy, identity-based populism that draws from that lowest common denominator Sanford alluded to. If it agitates the base, if it lights up a Fox News chyron, if it serves to alienate sturdy real Americans from delicate coastal elites, then it’s got a place in the Grand Old Party.

“Owning the libs and pissing off the media,” shrugs Brendan Buck, a longtime senior congressional aide and imperturbable party veteran if ever there was one. “That’s what we believe in now. There’s really not much more to it.”

But this isn't really right. It's true that the Republican Party has become a cult of personality around Trump. But the administration — like the party that supports it — retains many key ideas that shape its policies and will shape another term of a Trump presidency, if he wins it. If Joe Biden wins, other principles will control the federal government. Trump's second term will undoubtedly be filled with more efforts to enact and entrench these principles as government policy. It's professional negligence if reporters ignore these principles and Trump's clear second-term agenda. "More of the same" may not seem like a shiny new idea for reporters to talk about, but the stakes are incredibly high. Reporters should make it clear to readers what the differences will be between a second Trump term and a new Biden administration, and why they matter.

One major difference centers on Trump's key issue: immigration. Immigration restrictionism is a core goal of the GOP under Trump, even if the principle was initially presented as mere opposition to illegal immigration. That pretense is dropped now. Especially since the coronavirus crisis, but starting from the early days of the presidency, the Trump administration has been aggressively using its authority to limit immigration to the United States and often immiserate migrants who make it here.

This is an animating idea for many in the party. Immigration should be reduced, they believe, and unwanted immigrants should be dealt with harshly. This vision has been enacted in dozens of policies, most notably the short-lived family separation policy, though that is far from the only example. The Trump administration has lowered the amount of refugees accepted annually to the United States to 18,000, a historic low. The Remain in Mexico policy and metering at the border severely limit the number of aslyum-seekers who can cross over. And Trump's infamous ban on immigration from a group of primarily Muslim-majority countries remains in place. In a second term, these policies will continue to fuel misery for migrants and would-be migrants, and Trump's aides will undoubtedly find more ways to enforce their xenophobic preferences.

Biden seeks to overturn these policies. He would, for instance, raise the cap on refugees to 125,000 annually, higher than during President Barack Obama's tenure. Making such changes would affect hundreds of thousands of lives, arguably many more, in profound and irreversible ways.

The big ideas of the GOP play out in other ways, too. The Trump administration has opened up federal lands for resource extraction. It has reversed more than 100 rules regulating environmental pollution, permitting industry to poison our skies and our brains. The National Labor Relations Board has been turned on its head, and it is now used to attack workers' rights. Under the Trump Justice Department, white-collar prosecutions have reportedly dropped to their lowest level ever. Biden would seek to reverse these trends, while Trump would pursue them more aggressively.

One area in which Trump's rhetoric most diverges from the reality of his party's principles is on health care. While Trump ran on insuring every American, his Justice Department has joined a lawsuit that seeks to strike down Obamacare — a move that could strip health insurance from tens of millions of Americans and slash protections for many millions more. The administration has also weakened Medicaid and made it easier for states to deny coverage to their residents. Alberta is right when he reports that the GOP has no plan to "replace" Obamcare, as it long promised to do. But he's wrong to conclude the party has no big ideas or plans for health care. Its plan is, quite clearly, to do what it can to take government-funded health care away from people while telling voters it's doing the exact opposite.

In the realm of foreign policy, the big ideas of Trumpism are also quite clear. The administration has been hollowing out the State Department. Trump has deliberately set out to weaken American alliances with Democratic countries while seeking deals and relationships with dictators and authoritarian states that can give him what he wants. Sometimes, that's just personal recognition and praise. And sometimes, as in the case of China, it's a series of minor deals that nonetheless let him claim victory.

Some critics may paint this as a foreign policy driven by a lack of ideas, but again, this misses the point and fails to appreciate the very dangerous ideas at play. Trump's foreign driven by complete disdain for the world of professional diplomacy. He wants to break down international ties based on democratic values and replace them with alliances that are narrowly and personally beneficial to him.  This is a genuinely terrifying view of what foreign policy should be, but it's clearly a coherent idea all on its own.

Alberta and others fail to see these animating ideas behind the GOP and Trumpism, perhaps because they stand in contrast to the story they would like to tell about the party. But all of these actions flow from principles — some directly from Trump himself, others straight from Republican orthodoxy — that comprise a genuine governing philosophy. It's a deeply frightening vision for the country, so the GOP would rather the voters don't understand it.

The leftist Democratic Socialists of America, which helped congressional star Alexandria Ocasio-Cortez get elected in 2018, looks to be a big political player again in New York City's 2021 municipal elections.

Igor Novikov was asked to listen in to the call with Giuliani that gave Ukraine the implication that he was trying to create policy. Giuliani introduced himself as President Donald Trump's personal lawyer but also implied that he was a policy adviser.