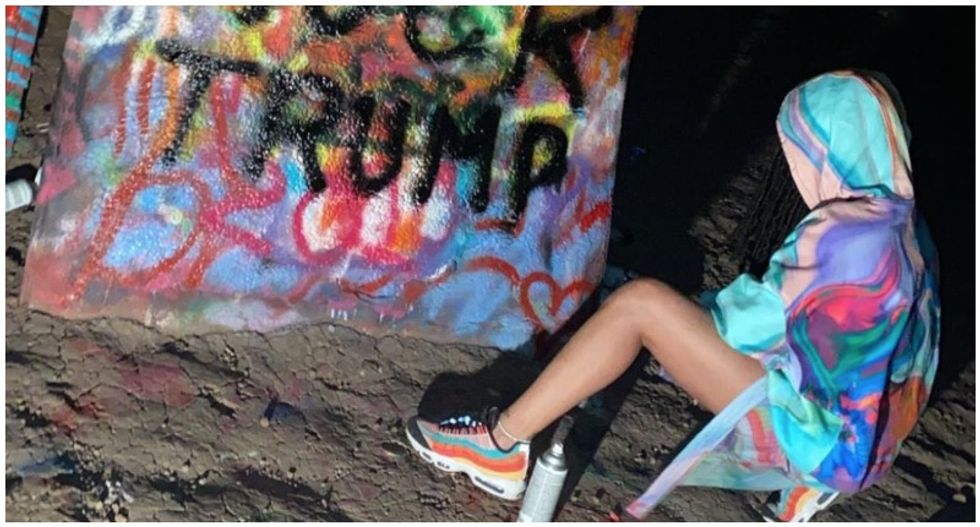 Grammy Award-winning singer Rihanna visited the famous Cadillac Ranch in Amarillo, Texas, this past weekend, which is a field with 10 Cadillacs buried nose-down that featured the spray-painted etchings and artwork of visitors.

Rihanna spray-painted the words "F*ck Trump" on one of the cars and posted images to social media, sparking an outcry from locals who support President Trump. According to KAMR, about 100 people showed up the the Ranch to voice their support for Trump and paint their own messages of support.

“Well, I kind of thought it was disrespectful for her to come to our town. This is the heart of Trump country. Of course, she had a right to do it. But as you can see, we came out-we and came out with bigger forces because this is Trump country, ” said Trump supporter Gracie Hodge.

"This is if you’ll notice there was a lot of kids out here. This is family. You don’t. You don’t write profanity in a public place,” said Castle.

A video of the Trump supporters’ artwork shows several Qs painted onto the cars – a reference to the QAnon conspiracy theory.

While the majority of Sunday's crowd were Trump supporters, a small contingent of anti-Trump demonstrators arrived on the scene and painted over the pro-Trump messages. According to KAMR, the two groups repeatedly painted over each other's messages.