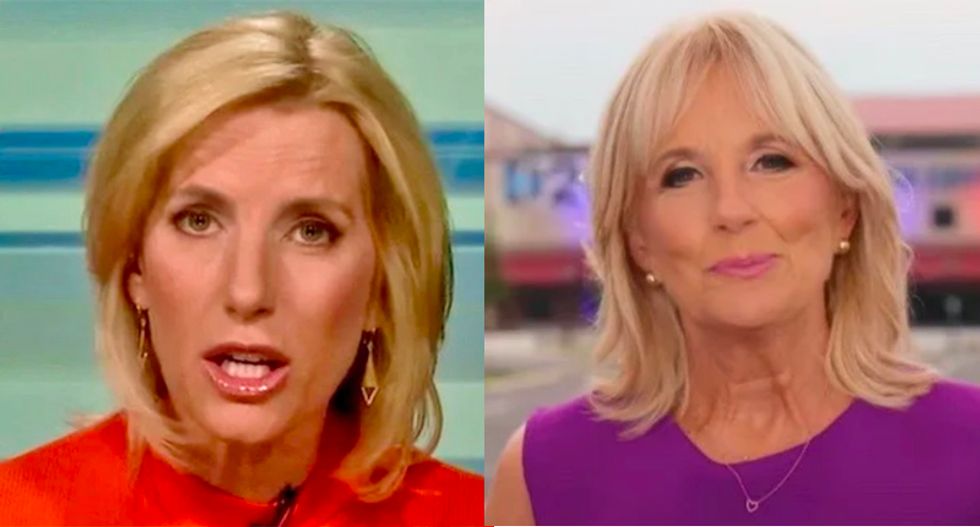 According to a report at the Daily Beast, conservative supporters of Donald Trump have wasted no time going after Dr. Jill Biden, wife of Democratic presidential nominee Joe Biden, with Fox News personality Laura Ingraham jumping into the fray.

In a deep dive documenting the sexist and racist attacks on Sen. Kamala Harris (D-CA) who has joined the former vice president as his running mate on the 2020 ballot, the report notes that Biden's wife, an educator, is not being spared from a conservative smear campaign.

The first volley came from the Daily Mail tabloid which ran a story accusing Jil Biden of adultery based upon "unverified claims from her first husband, a now 72-year-old man named Bill Stevenson, who said Jill had an extramarital affair with Joe Biden in 1974."

That story was then picked up by rightwing outlets like the New York Post and the Washington Examiner which then trickled down to Fox's Ingraham who tried to make it go national.

According to the Beast, "In an Aug. 18 episode of The Ingraham Angle on Fox News, host Laura Ingraham devoted a few seconds of airtime to promoting the report, calling it 'explosive.' The segment ran over the chyron 'Biden pretending to be faith & family candidate.'"

The report goes on to note that Trump 2020 campaign official Mercedes Schlapp "barely acknowledged the story much at all" and tried to change the subject to the Biden's stance on Planned Parenthood after Ingraham brought it up.

In the same segment, Fox News personality Raymond Arroyo -- a frequent contributor to Ingraham's program -- made an attempt to tie the attack to the Democratic nominee.

“They want you to think Joe Biden’s a great guy. He’s a nice guy. He’s a man of faith. He’s a family man," he suggested. "And now with Jill’s ex-husband questioning when they might have met, the conditions of their meeting and possible affair, all of this is sort of thrown up in the air. So, I do think that’s going to have to be scrutinized in the days ahead, as Donald Trump’s relationships and questions about his personal life were scrutinized.”