Trump was ‘cornered’ in briefing and ‘could not come up with a lie to justify his over 20,000 lies’: Lawrence O’Donnell 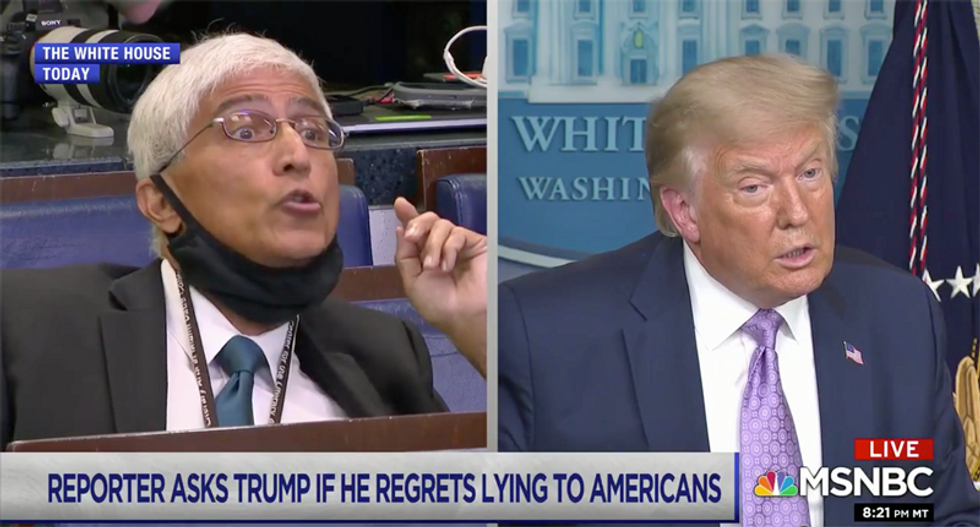 MSNBC anchor Lawrence O'Donnell on Thursday praised a member of the White House press corps for an insightful questioning of President Donald Trump.

"According to The Washington Post ongoing official count of Trump lies, as of a month ago when The Washington Post released their last official total of Trump lies during his presidency," O'Donnell explained. "Donald Trump has told over 20,000 lies and today in the White House press briefing room, Donald Trump was finally -- finally -- asked how he feels about those lies."

“After three-and-a-half years, do you regret at all — all the lying you have done to the American people?” Dáte asked.

“All the what?” Trump replied.

“All the lying, all the dishonesties,” Dáte clarified.

O'Donnell noted Dáte posted on Twitter that he had been waiting for five years to ask that question.

"Unfortunately the next reporter to ask Donald Trump a question did Donald Trump a favor of completely changing the subject to the payroll tax," O'Donnell noted. "But what you saw there was Donald Trump's complete and utter inability to respond in any way to the accusation that he has been lying from that podium for three and a half years."

Donald Trump did not even deny that he has been lying for three and a half years," he noted. "As high speed a liar as he is, Donald Trump could not come up with a lie to justify his over 20,000 lies."

"He cornered Donald Trump with that question and left Donald Trump -- as you just saw -- utterly speechless," O'Donnell explained.