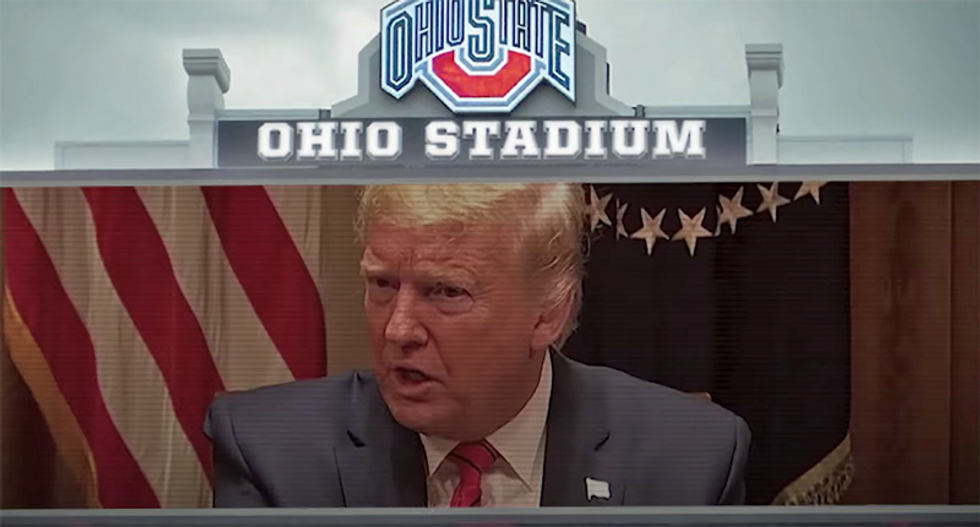 Donald Trump as featured in a new ad from MeidasTouch (screengrab)

President Donald Trump on Saturday worried he is going to get blamed for Americans being unable to watch football this fall.

However, Trump's fears are coming true as he will be blasted a new television ad by the political action committee MeidasTouch.

An ad titled "Emptied Stadiums" will begin airing in the battleground state of Ohio, focusing on the Cincinnati and Dayton markets.

The ad features close up views of turf in the stadium, with Trump's false claims about the coronavirus pandemic sounding as if they are playing over the stadium speakers.

Instead of yard lines, however, there are markers of COVID-19 fatalities.

"Trump's inaction killed stadiums worth of Americans," the ad charges. "And now our stadiums are empty."

The ad is part of a "six-figure TV buy" for two ads the group told Raw Story.

The PAC was founded by three brothers during the coronavirus shutdown.

"On issue after issue, Donald Trump’s record doesn’t match his promises. From his failed response to the pandemic to the economy, healthcare reform and even presidential vacations, Trump has flip-flopped and failed to deliver time and time again," said Brett Meiselas, who co-founded the PAC with his brothers Ben and Jordan.

"As people across America are being forced to cancel weddings, college football and trips to see grandma due to Trump’s failed COVID-19 response, voters will reject this undeniable failure come November and cancel Donald Trump," he argued.