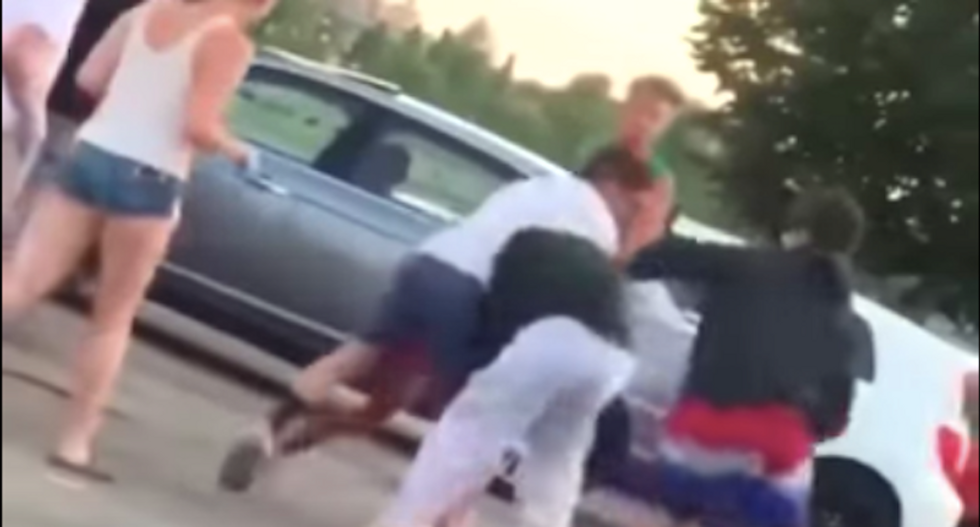 Multiple videos shared on social media show the 17-year-old Rittenhouse, who has been charged with two counts of first-degree homicide charges, involved in July 1 altercation in downtown Kenosha, where he killed a pair of protesters last week, reported The Journal Times.

The newspaper confirmed the authenticity of one of those videos recorded nearly two months ago, which shows Rittenhouse wearing the same red, white and blue Croc shoes also seen in a Facebook photo showing the teen holding a rifle.

Rittenhouse and another young man then argue with the young woman in sweatpants, who then starts scuffling with a third young woman.

Then Rittenhouse appears to land several punches on the young woman in sweatpants as another young man unsuccessfully tries to hold him back.

At that point, the two young men who were recording video and several other onlookers jump out of their vehicles to break up the fight.

"Do not put your hands on a female," someone tells Rittenhouse.

A second video shows Rittenhouse was kicked several times during the scuffle.

Reese Granville, who filmed one of the videos, confirmed the date and location of the fight, and he and C.J. Wakefield, who also recorded a video, confirmed Rittenhouse's involvement.

Granville told the newspaper that he doesn't know what provoked the fight he witnessed after driving past and stopping to record video.

Rittenhouse, who lives about a half hour away from Kenosha, in Antioch, Illinois, is expected to claim self defense in the shootings that left two protesters dead and another injured.

His attorney Lin Wood claims Rittenhouse obtained the rifle used in those killings from a friend in Wisconsin, and that the gun never crossed state lines.