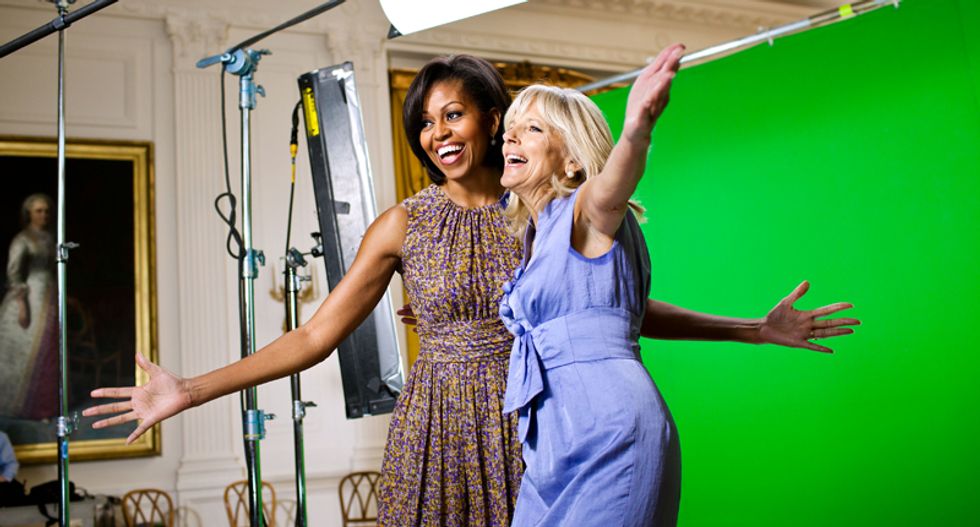 Former vice president Joe Biden will "tell the truth and trust science" if he is elected to the White House in November, former First Lady Michelle Obama said on Monday as Democrats kicked off their now-virtual convention.

With the Democratic party poised to officially anoint the 77-year-old Biden as its presidential candidate, President Donald Trump defied coronavirus concerns and staged competing events in Wisconsin and neighboring Minnesota.

Michelle Obama was given the primetime slot on the opening night of the Democratic convention, which was to have been held over four days in Milwaukee, Wisconsin, but which is now taking place almost entirely online because of the COVID-19 outbreak.

In excerpts of her remarks released ahead of her taped speech, Michelle Obama said Biden was a "terrific vice president" during the eight years he served as her husband Barack Obama's number two.

"I know Joe. He is a profoundly decent man guided by faith," she said.

"He knows what it takes to rescue an economy, beat back a pandemic and lead our country," the former First Lady said.

"He will tell the truth, and trust science," she said in a jab at Trump, who has been accused of repeatedly ignoring the advice of his scientific advisers on how to deal with the COVID-19 epidemic.

"He will make smart plans and manage a good team," Obama said. "And he will govern as someone who's lived a life that the rest of us can recognize."

Vermont Senator Bernie Sanders, who challenged Biden for the nomination from the progressive left, was also scheduled to address the convention, which is being live-streamed.

"This election is the most important in the modern history of this country," Sanders said in remarks released ahead of his appearance.

"We must come together, defeat Donald Trump and elect Joe Biden and Kamala Harris as our next president and vice president," Sanders said. "My friends, the price of failure is just too great to imagine."

Trump flew on Air Force One meanwhile to Mankato, Minnesota, and Oshkosh, Wisconsin, and delivered remarks to supporters gathered on the airport tarmac.

"This is the most dangerous election we've ever had," Trump said. "It'll be another Venezuela. This will be a very large-scale Venezuela if they win."

The Democratic convention is taking place amid a furor over Trump's own efforts to limit mail-in voting.

Insisting without proof that it fosters fraud, Trump has threatened to block extra funding that Democrats say is urgently needed to allow the US Postal Service to process millions of ballots.

Democratic Party chairman Tom Perez said the convention would push back against Trump's "assault on our democracy" by highlighting efforts to protect voting by mail.

"This president can't win on the merits and so he has to cheat. And it's shameful," Perez told a Washington Post webcast.

Oshkosh, where Trump was speaking, is about a 90-minute drive north of the Milwaukee arena where Democrats had intended to gather in a sign of eagerness to win back Wisconsin, one of multiple Democratic strongholds which flipped to Trump in 2016.

But the coronavirus pandemic, which has killed some 170,000 people in the United States, upended election campaigning.

The Democratic convention and the Republican event, which begins on August 24, will be held virtually, without the usual roaring crowds and confetti.

"We may be physically apart, but this week Democrats are coming together from across the nation to put forth our vision for a better America," Biden tweeted.

Biden and Harris will address the convention live via videolink, while other speeches will be "a mix of live and curated content," the campaign said.

Biden enters the week with significant but tightening poll leads over Trump, and hoping his pick of Harris -- the first woman of color on a major party's presidential ticket -- will invigorate Democrats.

The California senator, former prosecutor and daughter of Indian and Jamaican immigrants is 55 and brings relatively youthful energy to the ticket.

On Wednesday, Barack Obama will speak, and Harris will have her spotlight moment before the convention culminates Thursday when Biden formally accepts the Democratic nomination and delivers his acceptance speech.