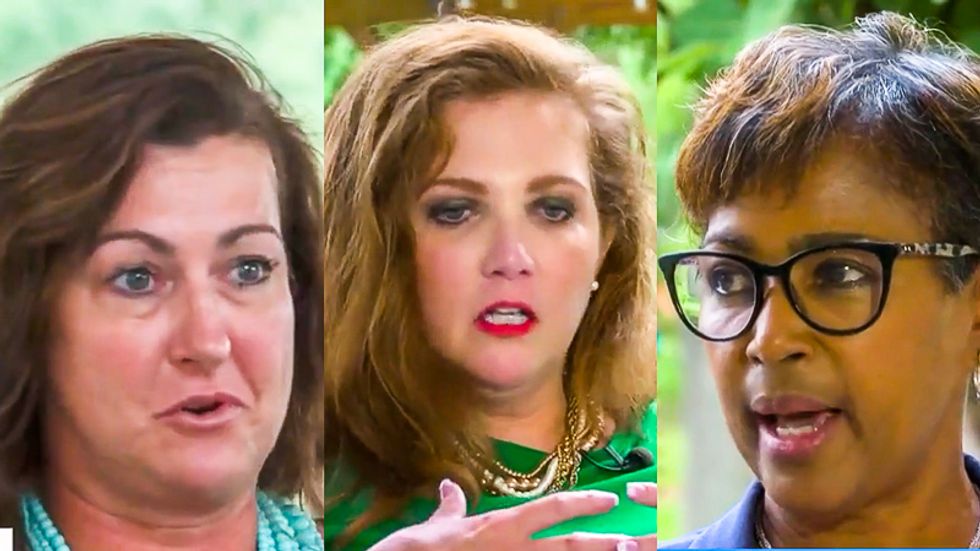 A panel of white women in North Carolina suggested this week that the Black community is making them seem like "bad people."

Ahead of the second night of the 2020 Republican National Convention, MSNBC's Chris Jansing presented the panel of North Carolina women who "continue to see the world through the lens of Donald Trump."

"Speaking for white America, we're not bad people," one white woman explained to Jansing. "We are very angry that African-Americans and the Black American community has been marginalized, victimized."

She continued: "So what happens is, it's like if you align yourself with Donald Trump, you're a racist."

Another woman agreed with the sentiment.

"I've tried to have these conversations and was just force-fed that I was wrong just because I was a white woman and I was a Trump supporter," Hayden Desio-Munn complained.

"Yeah," the first woman lamented. "We are suddenly all bad and so I think where white America feels frustrated [and it] makes us want to vote for Trump. So, it's kind of backfiring."

When Desio-Munn explained that Trump "wants to take the United States back where it should be," the lone black Democrat on the panel spoke up to object.

"I don't know which America you are seeking," attorney Althea Richardson-Tucker said. "Is it 20 years ago? Is it 10 years ago? Is it the 1940s, the 1950s, the 1960s? We were discriminated against, we were vilified. We do not want to go back to that. However, going back to a country that believes in Democracy, that's the country we want to see."