Yes, God can be hurt, but not in the way Trump claims, according to theologians 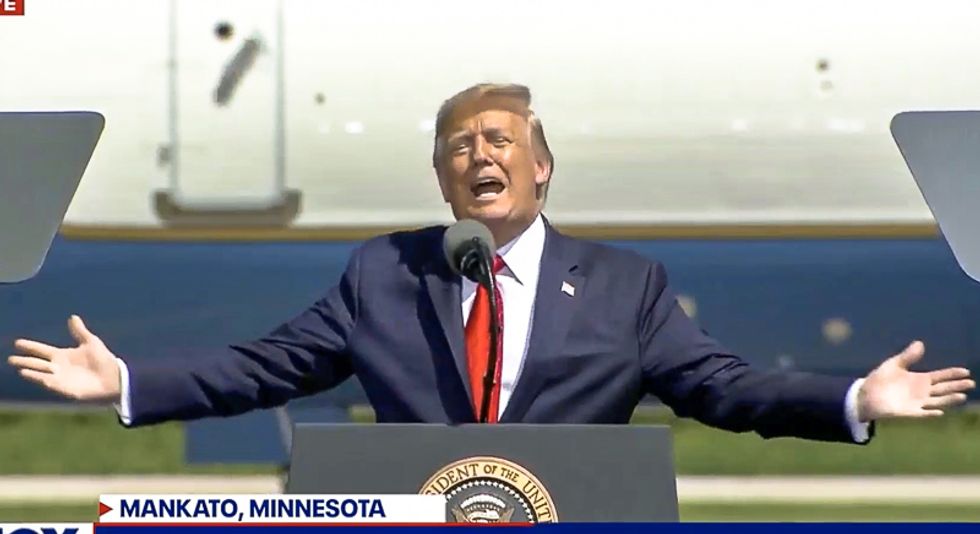 President Trump claimed recently that the prospect of a Biden presidency would “hurt God.”

With this speech, delivered in a rally-style address on Cleveland, Ohio’s airport tarmac on Aug. 6, Trump conveyed that a vote for Biden would weaken religion in the public sphere and restrict access to guns, thus tapping into the anxieties of his conservative Christian base.

As experts in Christian theology and the philosophy of religion, we explain how in Christian thinking, it might actually be possible to hurt God – just not in the way that Trump claims.

Classically, Christians have held that the God described in the Bible is metaphysically ultimate – meaning that everything that isn’t God was created by God and depends for its existence on God. God is believed to be a perfect being, without defect in mind or will.

If, as Christians suppose, God is an ultimately perfect being, then God’s perfect personhood necessarily involves a fulfilled inner life, a perfectly satisfied mind and will. God must possess perfect beatitude, perfect happiness and perfect well-being.

God then is believed to not be susceptible to sadness and other such emotions that are expressions of unfulfilled desires.

Theologians have coined the term “impassibility” to this idea that God’s well-being must be unaffected by anything or anyone, for good or for ill. The root of this term is the Latin “passiones,” which means emotions or “passions.”

There are many proponents of this view. Bishop and early Christian author Ignatius of Antioch described God as “impalpable and impassible,” in a letter to a Polycarp, another bishop in the early Christian Church, that dates from around A.D. 118.

A detailed defense of this idea appeared centuries later with the fifth-century theologian Augustine of Hippo. In later years, Thomas Aquinas, a 13th-century Italian theologian with enormous influence in the Catholic tradition, also supported this view.

In the 16th century, the Swiss theologian John Calvin and the German reformer and theologian Martin Luther, who started the Protestant Reformation, made impassibility a standard picture of the divine.

But Christian thought does allow for the possibility of “hurting God” in other ways.

The medieval theologian Anselm of Canterbury examined how humans might hurt God in his book “Cur Deus Homo” or “Why God became human.”

In that book, he aimed to answer the following question: If Jesus atoned for our sins, what does this mean?

To understand what it would mean to harm God’s honor, consider this analogy by Catholic philosopher of religion Eleonore Stump. She asks us to imagine a situation where you spread a false, hurtful rumor about your colleague Beth to your friend Priya. Priya knows you’re lying, so you haven’t harmed Beth. But there is still a sense in which you’ve done wrong by Beth – you have done her an injustice.

Theologians believe that humans can harm God in similar ways: They can’t hurt God, but can still do God an injustice. But unlike human beings, God can’t feel upset or otherwise emotionally dissatisfied. Any such emotional dissatisfaction would be inconsistent with the fulfilled inner life that a perfect divine person must have.

Yet, a puzzle arises: The scriptures frequently talk about God’s emotions. For example, God is often depicted as angry or as taking pleasure in things creatures do.

Aquinas helps us reconcile divine emotions with impassibility, as religion scholar Anastasia Scrutton, explains. Aquinas draws a distinction between “passiones,” emotions that are not under our voluntary control, and “affectiones,” which are voluntary and rational. These constitute ways in which God evaluates situations.

In human beings, affectiones and passiones are always bound up together. For example, when a human being is angry – when she witnesses an unjust situation, for example – she will also feel upset. By contrast, theologians imagine that God can become angry without becoming upset.

In Aquinas’ views, when our character and conduct occasion God’s negative affectiones, we harm not God’s inner well-being but God’s relationship to us.

A view from the Scriptures

Under this interpretation, the question arises: What kinds of character and conduct dishonor God, displease God and therefore do God an injustice?

In the Bible, the Prophet Isaiah says that the time when the Messiah returns is a time when the people of all nations “will beat their swords into plowshares and their spears into pruning hooks. Nation will not take up sword against nation, nor will they train for war anymore.”

Put in today’s context, Isaiah’s vision of the social order God aims to establish is one in which tools of war are exchanged for tools of agriculture and ecological caretaking.

For those who take Isaiah’s words to express divine intentions for human beings here and now – those who read Isaiah religiously as Scripture through which God addresses us – this vision calls readers to forfeit their implements of war, such as guns, in today’s world. Thus, in Isaiah being “against guns” does not imply being “against God.” In fact, it is quite the contrary.

On erasing religion from the public sphere, God speaks through the mouth of the Hebrew Bible prophet: “I hate, I despise your religious festivals; your assemblies are a stench to me.” God despises these festivals, because the people are, in God’s views unjust. Thus, the Prophet says “Even though you bring me burnt offerings and grain offerings, I will not accept them.” Instead of religious festivals, God exhorts people to “let justice roll on like a river, righteousness like a never-failing stream.”

It would appear then, for readers who take these words in Isaiah to heart, that harming God is not the same as removing religion from the public sphere. Indeed, being unjust would be a greater harm.

No one better embodies this repudiation of violence and being a voice for the underclass than Jesus himself.

According to traditional Christian teaching, Jesus is God manifest as a human being. The Gospels clearly state how he advocated “love your enemies and pray for those who persecute you.” He condemned the religious hypocrisy of seeking the place of honor and public respect while neglecting the poor, oppressed and socially marginalized.

Dishonoring these stances taken by Jesus, God in the flesh, would then appear to harm God. As religion scholars, we then argue that the Christian tradition to which Trump appeals when he claims that a Biden presidency would “hurt God” does not support that claim.