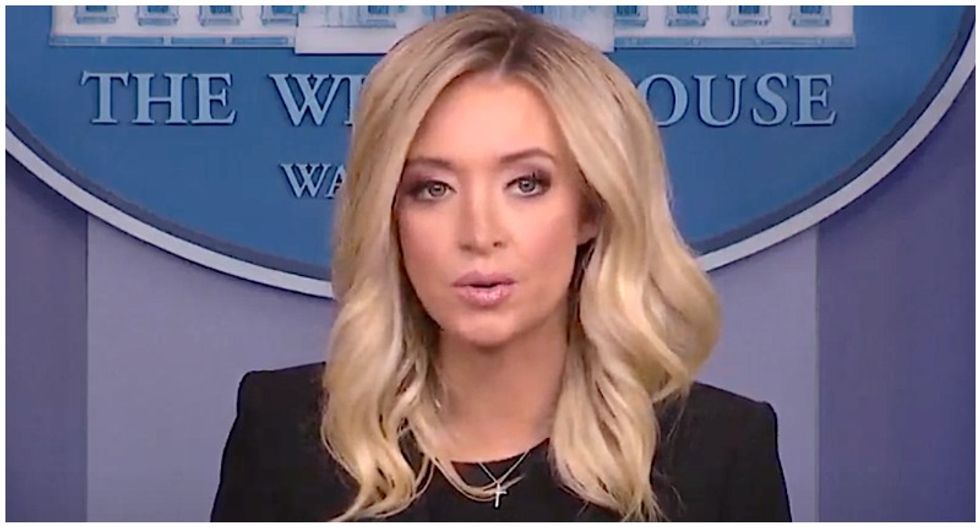 President Donald Trump's ABC town hall event teased a healthcare plan that he has been promising for months. The plan was then confirmed Wednesday by White House press secretary Kayleigh McEnany, who acknowledged the plan but said that Americans and the press couldn't have access to it.

In 2015, Trump promised that the GOP would repeal and replace the Affordable Care Act, known as Obamacare. In an appearance on Sean Hannity's radio show, he claimed the replacement would be "something great," but five years later, the plan still hasn't been revealed to the public.

Once Trump took office in 2017, he complained that the Senate must confirm former Health and Human Services Secretary Tom Price because the "repeal and replacement of ObamaCare is moving fast!"

Despite the long delays by the Democrats in finally approving Dr. Tom Price, the repeal and replacement of ObamaCare is moving fast!
— Donald J. Trump (@Donald J. Trump) 1487326412.0

There was another promise during his State of the Union Address later that month when the president promised, "The way to make health insurance available to everyone is to lower the cost of health insurance, and that is what we are going to do."

But after Price was confirmed and over three years after that announcement, the proposal from Trump's White House still wasn't revealed.

Trump's plan seemed to evolve later that year when the GOP failed to repeal Obamacare because there was no plan introduced to replace it. It was a deal-breaker for Sen. John McCain (R-AZ), who voted down the measure.

"ObamaCare is a broken mess. Piece by piece we will now begin the process of giving America the great HealthCare it deserves!" Trump announced.

ObamaCare is a broken mess. Piece by piece we will now begin the process of giving America the great HealthCare it deserves!
— Donald J. Trump (@Donald J. Trump) 1507893252.0

Despite promises from the president in 2019, the plan still has not been unveiled.

"The Republican Party will become 'The Party of Healthcare!'" Trump promised.

In April, however, Trump pulled back on his healthcare efforts explaining that he never planned to pass a new GOP healthcare law so early. According to the president, he wanted to wait closer to the election.

"I was never planning a vote prior to the 2020 Election on the wonderful HealthCare package that some very talented people are now developing for me & the Republican Party. It will be on full display during the Election as a much better & less expensive alternative to ObamaCare…"

"You'll have health care the likes of which you've never seen," he promised later that year in October.

Finally, as 2020 began, Trump gave Americans a timeline of "two weeks" for the plan.

"We're signing a health care plan within two weeks, a full and complete health care plan that the Supreme Court decision on DACA gave me the right to do," Trump promised in a July 19 interview with Fox News.

After two months, Trump teased the plan again in the town hall. It matches his criteria of being closer to the election and certainly more than two weeks after his July promise. McEnany confirmed the White House's proposed law is ready to go, but she told reporters that Americans and the press aren't allowed to see it. It's unclear why the plan is a secret since the president talked about it for so long. Still, McEnany didn't clarify why the plan will remain a secret.

"I'm not going to give you a readout of what our health care plan looks like and who's working on it. if you want to know, come work here at the White House,"  McEnany told CNN's Kaitlan Collins.

Watch the video revealing the secret plan below: