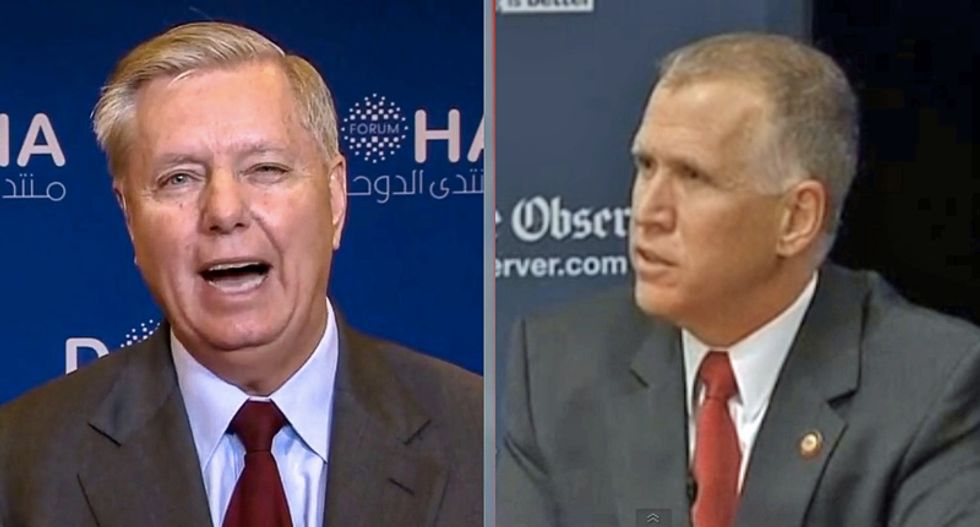 PBS News gathered what all Republicans have said about whether the president in 2016 should have the right to appoint a justice at that time. Now that the shoe is on the other foot, these Republicans are having their own words brought back and questioning why the rules are different for Democrats.

A Reuters poll shows that 62 percent of Americans want to see the next president appoint the Supreme Court Justice and not President Donald Trump.

While there are some Republicans who are employing a "wait and see" approach, here is the list of hypocrites who seem fine letting Trump do whatever he wants:

Sen. Richard Shelby (R-AL): “President Obama is attempting to solidify his liberal agenda by drastically changing the direction of the Court for decades to come. This critical decision should be made after the upcoming presidential election so that the American people have a voice.”

John Boozman (R-AR): “Our country is very split and we are in the midst of a highly contested presidential election. My colleagues and I are committed to giving the American people a voice in the direction the court will take for generations to come.”

Tom Cotton (R-AR) who is on the short-list to be nominated: “In a few short months, we will have a new president and new senators who can consider the next justice with the full faith of the people. Why would we cut off the national debate on the next justice? Why would we squelch the voice of the populace? Why would we deny the voters a chance to weigh in on the make-up of the Supreme Court?”

Corey Gardner (R-CO): “… the next president of the United States should have the opportunity to fill the vacancy on the Supreme Court.”

Marco Rubio (R-FL): “I don’t think we should be moving forward on a nominee in the last year of this president’s term. I would say that if this was a Republican president.”

Dave Perdue (R-GA): “What’s at stake here is the balance of our nation’s highest court and the direction of our country for decades. I remain firm in my decision to exercise my Constitutional authority and withhold consent on any nominee to the Supreme Court submitted by President Obama.”

Mike Crapo (R-ID): “As part of its role in this process, the Senate may, at its discretion, withhold consent. The next Supreme Court justice will make decisions that affect every American and shape our nation’s legal landscape for decades. Therefore, the current Supreme Court vacancy should be filled by an individual nominated by the next president of the United States.”

Joni Ernst (R-IA): “In the midst of a critical election, the American people deserve to have a say in this important decision that will impact the course of our country for years to come.”

Pat Roberts (R-KS): “The next justice will have an effect on the courts for decades to come and should not be rushed through by a lame-duck president during an election year. This is not about the nominee, it is about giving the American people and the next president a role in selecting the next Supreme Court justice.”

Mitch McConnell (R-KY): “The American people should have a voice in the selection of their next Supreme Court justice. Therefore, this vacancy should not be filled until we have a new president.”

Roger Wicker (R-MS): “The American people should have the opportunity to make their voices heard before filling a lifetime appointment to the nation’s highest court. In November, the country will get that chance by choosing a new president – a process that is well underway. Until then, our time should be spent addressing the many other legislative matters before us to strengthen our economy, create jobs, and secure our nation.”

Roy Blunt (R-MO): “The Senate should not confirm a new Supreme Court justice until we have a new president.”

Steve Daines (R-MT): “The replacement of Justice Scalia will have far-reaching impacts on our country for a generation. The American people have already begun voting on who the next president will be and their voice should continue to be reflected in a process that will have lasting implications on our nation. The U.S. Senate should exercise its constitutional powers by not confirming a new Supreme Court justice until the American people elect a new president and have their voices heard.”

Deb Fischer (R-NE): “It is crucial for Nebraskans and all Americans to have a voice in the selection of the next person to serve a lifetime appointment on the Supreme Court, and there is precedent to do so. Therefore, I believe this position should not be filled until the election of a new president.”

Richard Burr (R-NC): “The American people deserve a voice in the nomination of the next Supreme Court Justice. This appointment could easily tip the balance of the court in a direction not supported by the American people as evidenced by 2014’s election results giving Republicans both the Senate and House.”

Thom Tillis (R-NC): “While President Obama is entitled to nominate an individual to the Supreme Court, the Senate has made it clear it will be exercising its Constitutional authority to withhold consent of the nomination. We are in the middle of a presidential election, and the Senate majority is giving the American people a voice to determine the direction of the Supreme Court.”

John Hoven (R-ND): “There is 80 years of precedent for not nominating and confirming a new justice of the Supreme Court in the final year of a president’s term so that people can have a say in this very important decision.”

Jim Inhofe (R-OK): “While I will evaluate the nomination of Judge Merrick Garland, the next president should be the one to fill the vacancy on the Supreme Court. … I will oppose this nomination as I firmly believe we must let the people decide the Supreme Court’s future.”

James Lankford (R-OK): “Based on previous historical precedent, I support Majority Leader Mitch McConnell and Judiciary Committee Chairman Chuck Grassley’s intent to give the American people a say in Justice Scalia’s replacement this year at the ballot box.”

Pat Toomey (R-PA): “With the U.S. Supreme Court’s balance at stake, and with the presidential election fewer than eight months away, it is wise to give the American people a more direct voice in the selection and confirmation of the next justice.”

Tom Scott (R-SC): “The next president should fill the open seat on the Supreme Court, not a lame duck. Our nation is in the middle of an election that will replace this president and it has brought people out in every corner of our country in record numbers to have their voice heard. As elected officials, we need to protect the American people’s chance to have their voices heard in the decision on who will be appointed to a lifetime seat on the nation’s high court.”

Lamar Alexander (R-TN): “I believe it is reasonable to give the American people a voice by allowing the next president to fill this lifetime appointment to the Supreme Court. Under our Constitution, the president has the right to nominate, but the Senate has the right to decide whether to consent at this point in a presidential election year. Sen. McConnell is only doing what the Senate majority has the right to do and what Senate Democrat leaders have said they would do in similar circumstances.”

John Cornyn (R-TX): “At this critical juncture in our nation’s history, Texans and the American people deserve to have a say in the selection of the next lifetime appointment to the Supreme Court. The only way to empower the American people and ensure they have a voice is for the next president to make the nomination to fill this vacancy.”

Ted Cruz (R-TX): “This should be a decision for the people. Let the election decide. If the Democrats want to replace this nominee, they need to win the election.”

Mike Lee (R-UT): “In light of the contentious presidential election already well underway, my colleagues and I on the Judiciary Committee have already given our advice and consent on this issue: We will not have any hearings or votes on President Obama’s pick.”

Shelley Moore Capito (R-WV): “Before a Supreme Court justice is confirmed to a lifetime position on the bench, West Virginians and the American people should have the ability to weigh in at the ballot box this November. My position does not change with the naming of a nominee today.”

Ron Johnson (R-WI): “Let the American people have a voice in the composition of the Supreme Court. Instead of a lame duck president and Senate nominating and confirming, a new president and Senate – elected by the people only a few months from now – should make that important decision. I can’t think of a fairer or more democratic process.”

Mike Enzi (R-WY): “The Constitution gives the Senate the right to make decisions on a Supreme Court nominee. The chairman of the Senate Judiciary Committee has announced the committee’s intention to exercise its constitutional authority to withhold consent on a nominee submitted by this president. I believe the American people should decide the direction of the Supreme Court.”

John Barasso (R-WY): “A president on his way out of the White House should not make a lifetime appointment to the Supreme Court. The American people will soon decide our next president. That person should get to choose the next Supreme Court nominee. Give the people a voice, and let them chart the course for the court and the country.”