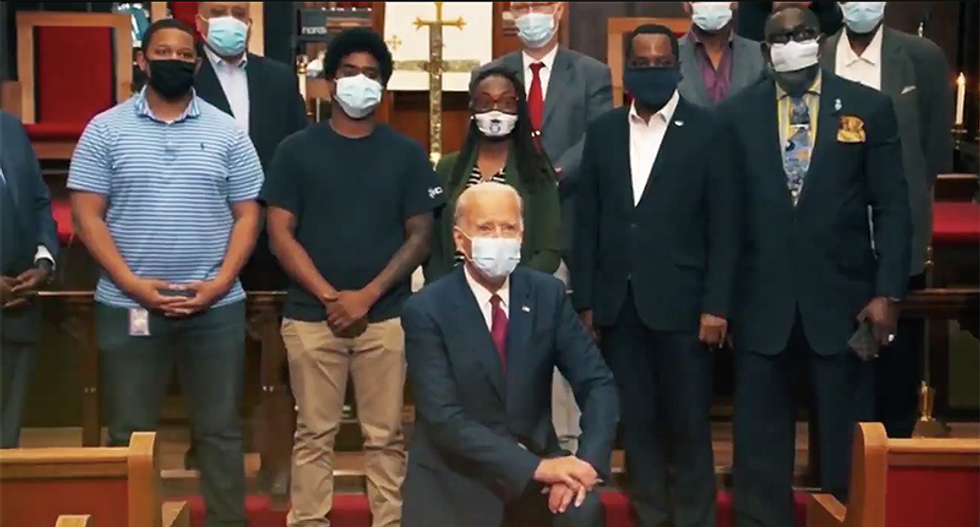 President Donald Trump's campaign is coming under fire by Black pastors and church leaders who are furious at an anti-Joe Biden ad depicting the former vice president kneeling in the African Methodist Episcopal Church and the pastor of an AME congregation in Wilmington, Delaware.

“The ad is overtly racist and offensive on numerous levels,” said Rev. Silvester S. Beaman, pastor of Bethel AME Church, according to the Religion News Service. “It is a racist attack on the African American church, and because it was an attack on the Christian church, it should be offensive to every Christian and person of faith.”

The ad is part of Trump's attempt to incite panic over the Black Lives Matter protests, which followed years of police violence that killed or maimed unarmed Black Americans.

As the ad ends, it shows slow-motion footage of Biden kneeling at Bethel in front of a group of Black leaders. The screen then flashes the phrase “Stop Joe Biden and his rioters.” An audio clip is then heard of Vice President Mike Pence saying, “you won’t be safe in Joe Biden’s America" with sounds of gunfire.

The footage was taken from Biden's visit in June where he met and prayed with Black pastors and church leaders about the death of George Floyd.

The ad signals that “white folk in general and Trump’s base should fear the Black church,” Rev. Beaman explained. Meanwhile, Trump is calling members of Black churches “thuggish rule-breakers.”

“That is an erroneous depiction and it is offensive,” he said.

Trump Campaign Deputy National Press Secretary Samantha Zager released a statement calling concerns about the ad "absurd." She went on to say it was "shameful to even make the allegation.”

Biden’s taking a knee in the video was part of a larger photo showing a “moral gesture of solidarity," for racial justice, Rev Rev. Beaman said. It “is not an anti-police movement.”

Still, Trump is working to paint all protesters as "rioters" and "thugs," racially charged language white supremacists use to dehumanize civil rights protesters.

“If (the Trump campaign) had been there, they would have heard us say that,” Rev. Beaman said. He noted that there are members of his congregation that are in law enforcement and are part of the conversation.

Read the full report at the Religion News Service.