Chuck Todd shreds GOP senator for making rules 'out of thin air': 'The party looks like a bunch of hypocrites' 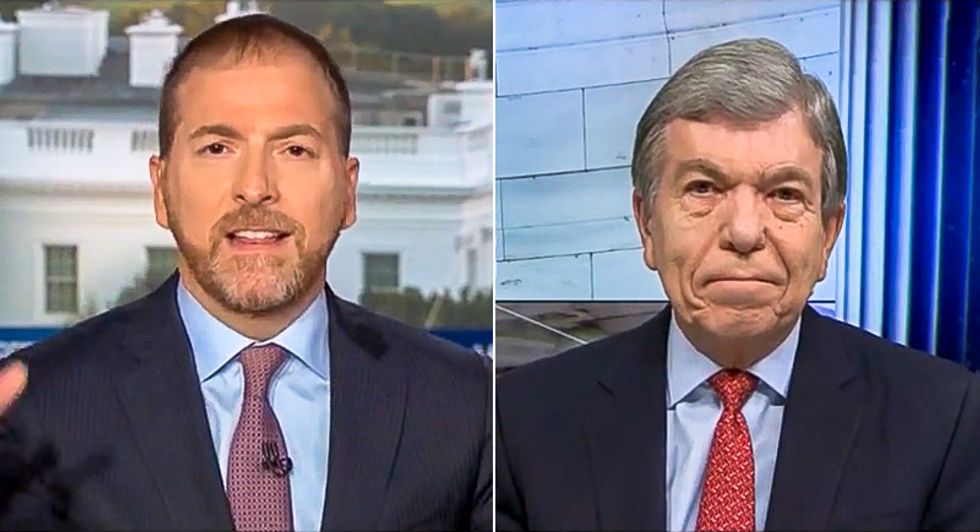 Chuck Todd, host of NBC's Meet the Press, on Sunday told Republican Sen. Roy Blunt (MO) that his party "looks like a bunch of hypocrites" because they are set to nominate President Donald Trump's Supreme Court pick in an election year.

"You have no qualms about doing this before the election?" Todd asked. "You've seen, polling is pretty overwhelming on this issue. A large majority of the American public do not believe this president before the election should make this pick and it should be whoever wins the election."

"That is not an unreasonable thing for the American public to think, is it not?" the NBC host said.

"It may not be unreasonable," Blunt replied. "But the Constitution sets up two standards to sit on the court, one is the president has to make a nomination and, two, is you have to have a Senate that will accept that nomination and agree with that nomination."

"Do you regret the hypocritical argument that you guys made four years ago," Todd pressed, "creating this sort of standard out of thin air and then backtracking on it four years later? And I know, you guys came up with these footnotes that says it depends on who controls the Senate. Senator Blunt, nobody made those footnotes in 2016. It was crystal clear to the American public what your views are."

"Are you concerned that the party looks like a bunch of hypocrites four weeks before the election?" he wondered.

"The voters will have to look at that and decide," Blunt remarked. "I don't know if we can make this decision -- or I know we shouldn't make it based on the politics of it but what our job is. And if we're in agreement in getting that job done."