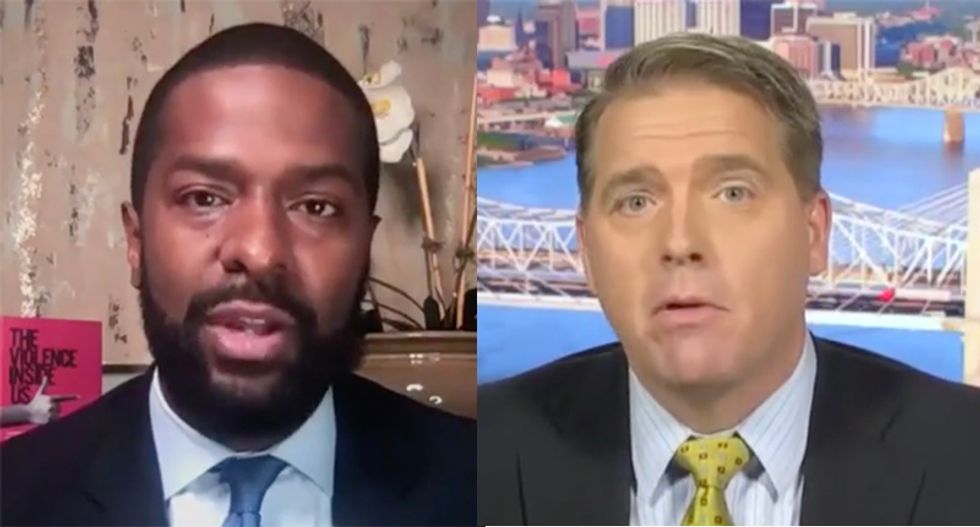 CNN contributors Bakari Sellers and Scott Jennings clashed on "New Day" on Tuesday morning after the conservative Jennings tried to dismiss the shooting of Jacob Blake in Kenosha by a police officer.

Discussing Donald Trump's planned visit to Kenosha on Tuesday, Seller's questioned the president's motivation by saying it was likely to incite more protests on the street which will play into the president's law and order talking point that has become central to his 2020 re-election campaign.

When the discussion turned to Blake, who was shot seven times in the back while a police officer held his shirt, the two fired back and forth at each other, when the conservative Jennings attacked the shooting victim, saying police were after him due to accusations of sexual assault.

Following an exchange where Jennings slammed Democratic presidential nominee Joe Biden's well-received speech on street violence on Monday, and Sellers replied, "Scott woke up this morning and got coffee and is deciding to spin stuff that doesn't make any sense," the two were off and running, causing host Alisyn Camerota to one time cut in and admonish the conservative for shouting over Sellers.

"Let me be clear, because a lot of times you want to muddy the waters and you want to sully a victim. and I will not allow that this morning," Sellers said of Blake.

"What I'll say, though --," Sellers continued only to have Jennings interject and say, "And I'm not going to allow you to sully the sexual assault victim. she deserves information, too. She deserves a voice, too!"

"You know, the most amazing part about this conversation is she deserves a voice," Sellers stated. "Whatever detail you're talking about. but the simple fact is this, that Jacob Blake did not deserve to have lethal force -- and you can laugh at it if you want to -- I'm sick and tired of people coming in and spinning that."

"Scott, I hear you. I hear what you're saying. I know you want to say that Jacob Blake wasn't a perfect person," Sellers explained. "I don't think that anybody's depicted him as that. But a warrant, even for a sexual assault case, is not a death penalty case."

"I totally agree," the conservative replied. "I think this ended in tragedy. I don't like it when these police interactions end in shootings -- it is the last resort, there is far too much of it. I don't like it one bit. I also don't like that we're glossing over the fact that the police were called there to protect a woman who had a sexual assault case to catch Jacob Blake."

"Nobody's glossing over that," Sellers replied.