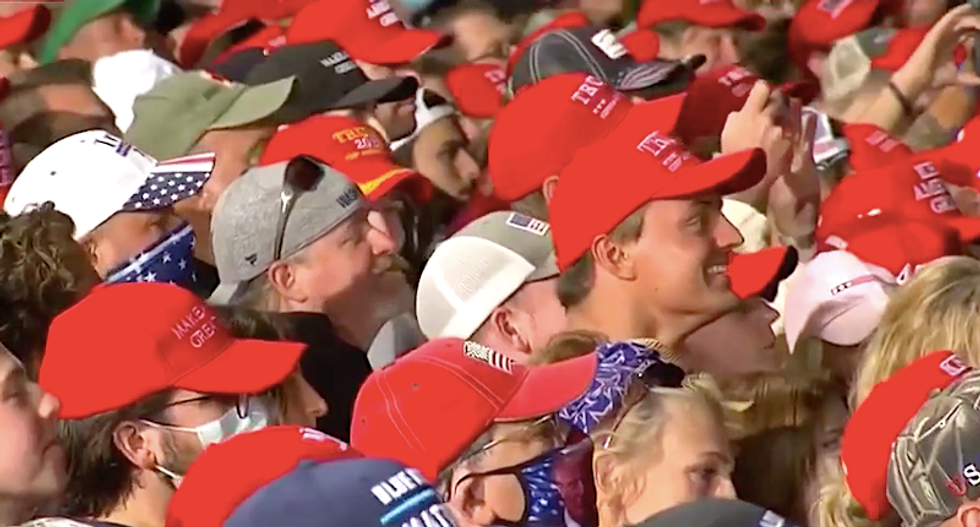 The president told cheering supporters in western Pennsylvania that it was "dangerous" to criticize him, and he questioned the right of Rep. Ilhan Omar (D-MN) to serve in Congress -- and the "Morning Joe" host said there was only one word to describe Trump's language.

"I don't know, we won't call them fascist comments and won't say that it's what autocrats do and say, but it is what autocrats do and say, when you're once again glorifying violence," Scarborough said, "and as the president's long done, you know, celebrated the fact that people could get hurt at their rally if they exercise their First Amendment rights, and of course, later on in the rally, the president, basically said a member of Congress was not an American, that you know, the whole, 'How is her country doing, why is she telling us what to do in our country?'"

"I'm sorry, if that's not what fascists do, I would love for a professor or somebody who studies fascism to let us know if that is not the practice of fascist leaders, and if Donald Trump may not be trying to imitate them and working his crowds into a frenzy," he added.

The president has recently celebrated police violence against MSNBC's Ali Velshi, which his supporters enthusiastically cheered, and Scarborough asked panelist John Heilemann whether he was being overwrought to call Trump fascist.

"[It's] not hyperbole," Heilemann said, "and you know, I think [for] all of us, the sad part about this is not that it's not -- not only is it not hyperbolic, but this is not like the first time, you know? The whole reason why I think all of us who were reluctant to use this kind of language, even after seeing Donald Trump do a lot of very disturbing things in the 2016 campaign, I speak for myself and I think for a lot of other people -- you know, you didn't want to leap to notions of fascism, to the kinds of language that now not only seems not hyperbolic but seems inevitable, like unavoidable."

"There are all these other labels, right?" Heilemann added. "Xenophobic, racist, demagogic -- all of those things are things that we are reluctant to apply to any politician, but Trump has been so consistently all of those things -- racist, sexist, xenophobic, autocratic and fascistic for so long now that even everyone who's kind of resisted that language, now it's not even that you apply it reluctantly, you apply it because there are no other words."

But the problem is far greater than Trump alone, he said.

"The thing that's disturbing about the entire thing is not that Donald Trump is a fascist and not that Donald Trump is an aspiring autocrat, but is that the response to all of that has only gotten more intensely positive in his crowd," he said. "Whether Donald Trump wins or loses this fall, those people and those views that they cheer and they embrace in Donald Trump, that slice of the electorate will still be here, and that is why I keep saying over and over again, the man is dangerous, but he is a symptom and not a cause."