Dr. Sanjay Gupta asked Trump about coronavirus facts from medical journals -- and the president lied to his face 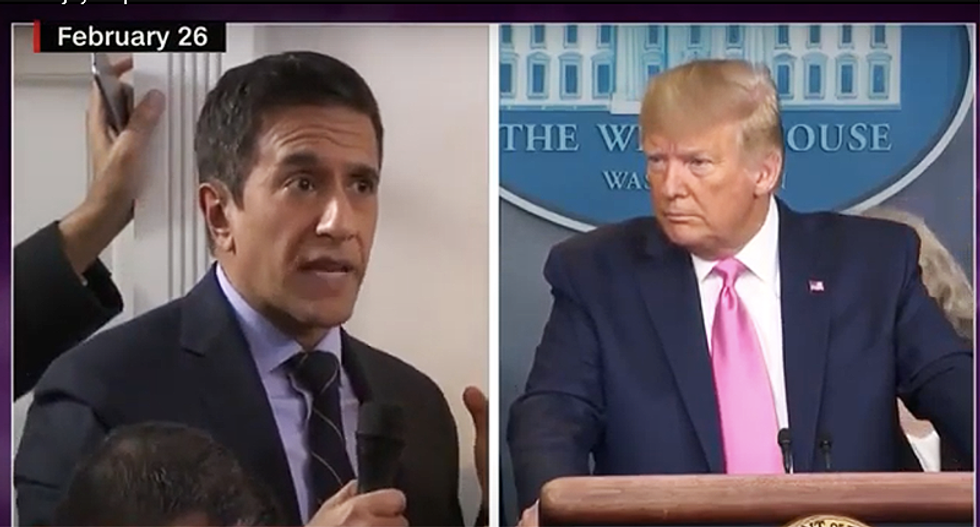 On Feb. 7, 2020, President Donald Trump told Bob Woodward that he knew the COVID-19 crisis would be "more deadly" than the flu by "five-times." Twenty days later, Dr. Sanjay Gupta attended a press briefing to ask the president specifics about the virus; Trump outright lied to his face.

"I had always wondered did the president know and just wasn't telling us because the data was coming out at that point," said the doctor. "The numbers I was citing to him were numbers that were in the medical journals. I thought that his health team, his public health team, would probably brief him on that, and he would know this. I didn't know whether he didn't know, or he knew, and he just was lying and not acknowledging what he knew at the time. Now I think it is pretty clear."

"Twenty days earlier, he says that the coronavirus is deadlier than the flu and even says five times deadlier than the flu, which is very interesting," Gupta continued. "The data that was coming out around that time suggested it was around that number. So, clearly, you know, he had been briefed, I think before he gave that interview to Bob Woodward or he had had a conversation with the president of China. I don't know how he got that. But, clearly, he knew three weeks earlier. Then when I asked him, he said, no, the flu is clearly much worse. That is a huge problem. We talk about this lost month of February, Wolf. That is the time frame, Feb. 7, when he gave that interview to Woodward. Feb. 27 when you just heard that exchange with me."

He explained that it's hard to know exactly how many lives could have been saved, but when comparing the United States to South Korea, which implemented huge actions early on, they've had 350 deaths while the U.S. just reached 190,000.

"So, you know, we could have implemented some of the same types of measures perhaps that other countries did and had a significantly lower death toll," said Gupta, before citing Columbia University data showing how many people could have been saved if Trump had implemented a lockdown two weeks earlier than he did.

"Wolf, there is a proven way of communicating about health emergencies," said Dr. Gupta. "Be first, be right, be credible, be empathetic, give people practical, useful things to do. If you think about those five things, none of them have been done, not first, not right, not credible, not empathetic, and not giving people things to do. What that means is we didn't start wearing masks when we should have. We didn't take it seriously. We didn't shut down soon enough in some places. Other places we shut down too soon, too long. This has been a failed federal response. The U.S. is a global laggard in our response. And we're coming up to a new, really important decision. Vaccine. What are people going to think when people talk about the vaccine? We have to be able to trust, or we can't control the pandemic. And for epidemics, those key principles of being honest and telling people what you know, when you know it, that's essential not just for the talking point. That is essential for what people do to stop the spread of a deadly virus."